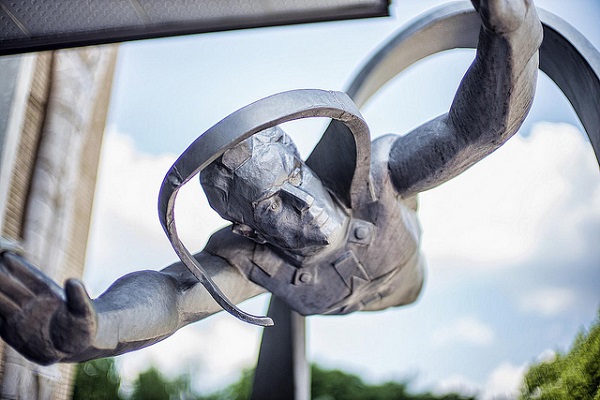 Not far from the route of the Central Asian Rally lies the legendary Baikonur Cosmodrome. A Russian enclave in Southwest Kazakhstan, a site that will always be historic monument for science and humanity. The first satellite, Sputnik was launched from Baikonur. This is also where the first human in space, Yuri Gagarin took off from. Right now it is the only spaceport supplying the International Space Station, too.

Unfortunately they are not well prepared to receive tourists, otherwise the Central Asian rally would definitely go and visit this exciting place. The vast steppe area is rented by the Russian government from Kazakhstan for $115 million a year, and it has a „closed city” status. Travelling to Baikonur requires special permits, though they are not impossible to acquire. With the Russians constructing their new spaceport in the Russian Far East, perhaps it will change in the not too distant future.

The Baikonur facility dates back to 1955, when it was founded as testing grounds to the first Soviet intercontinental ballistic missiles. The place was chosen because it is located in a very sparsely populated area, so secrecy could be well served. Because of this isolation, however, the cost of construction was enormous. When the Baikonur facility was appointed the home base of the Soviet space programme, the costs became – literally – astronomical.

The Soviet Union had several ballistic missile sites, which were similar to those needed for launching spacecraft. (Or so they rightly assumed, because of course they couldn’t know.) The choice came to Baikonur for several reasons: Its relatively hospitable weather compared to some other sites, the vast available surrounding area for expansion. It was the testing site R-7 ballistic missile, which was modified to launch the first Sputnik (Swords to plowshares, well done).

But most important of all it was the southernmost of the available sites. Because the rotation speed of the Earth is higher closer to the Equator, Baikonur was the site where the least propulsion was needed for a succesful launch. It is the same reason why the French have their spaceport in Guiana, or why commercial satellites are often launched from floating platforms from the Pacific.

The enclave is 57 sq kms (22 sq miles). The Cosmodrome itself of course is only a smaller part of the facility. The town of Baikonur was built in the middle of the Kazakh steppe for the sole purpuse to serve the base. It was originally named Leninsk, but often mentioned as Zvezdograd, („Star City”, though that is actually the training center near Moscow). It hosted not only the Soviet space program, but cosmonauts (not to be confused with American „astronauts”) from other Socialist countries and pseudo-neutral „non-aligned nations” also launched from here.

After the dissolution of the USSR space budget was cut down, so the town experienced a decline in population and economy. In the new millenium the Russian space program has had a new surge. Baikonur also profited from the increase of international projects, which they rent out their facilities for. The town has more than 36,000 inhabitants again. Most of them are very well paid expats, so when you go there, don’t expect it to be a cheap place.

Facilities of the Baikonur Cosmodrome

The Baikonur base has served the Soviet-Russian space program for almost sixty years. If you know what Cape Canaveral in Florida looks like, you might think there are two high towers with a shiny command office building next to it. Lots of antennas everywhere. Americans might be updating their equipment and clean up after a project, but in Baikonur, where space is abundant, it’s easier just to build a new pad for a new model.

That’s right. The Baikonur Cosmodrome has more than 70 launch pads. Of course most of them are not in use anymore, but if Space Cowboys had been a Russian film, it would’ve been absolutely realistic! The old launch pads are still there in Kazakhstan, and even the old equipment is probably lying around on some junkheap somewhere. The historical launch pad LC 1/5, however, which has seen off the first Sputnik, Yuri Gagarin and first female in space Valentina Tereshkova is still in use, having completed the 500th launch earlier in 2015.

The Decline of Baikonur Imminent?

Russia found itself in an awkward position after the fall of the Soviet Union. The Baikonur space complex was now in a foreign country, Kazakhstan. After a few years of confusion the two countries signed an agreement, whereas Russia pays $115 million as a yearly rent for the area. There have been problems with pollution and accidents as well, making the cooperation of the two states tense. The Kazakh parliament only ratified the deal in 2004, when Russia threatened to move its space program from Baikonur. However it seems that Russians are moving now anyway.

The construction of a new space complex, the Vostochny Cosmodrome began in 2011. It is expected to be fully operational next year, with altogether seven launch pads built in ten years. It is located by the Chinese border, in the Russian Far East on almost the same longitude as Baikonur. The Russians find that the cost of construction will pay off in only a couple of years by not having to pay „rent” to the Kazakhs. Roskosmos expects to attract most of the commercial revenue, now generated in Baikonur there as well.

Baikonur has already earned its place in Mankind’s history

But Baikonur will not just disappear. With much of the world’s commercial satellites launched from there Kazakhs can still expect to keep the business open. And even if it ceases to be the world’s busiest spaceport, it will be a monument worthy of keeping up forever: It is the place Man conquered space from. On the plus side, if it ceases to be a closed city, Central Asia Rally will take you there to see those monuments, you bet!