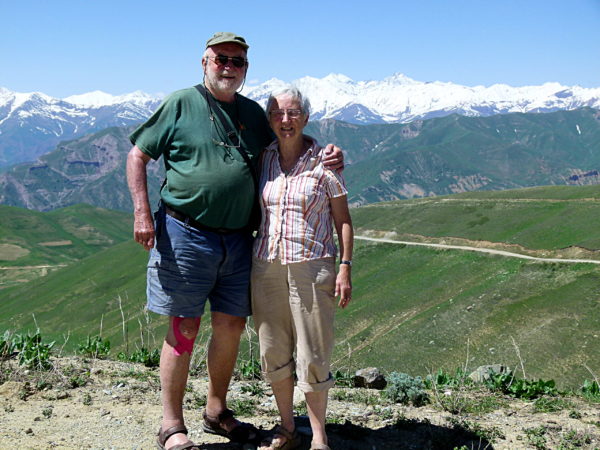 Tony Thorndike is a Travel Scientists regular, who completed the Central Asia Rally in 2014. He drove all the way from Britain to Bishkek and, even more impressively, back again! He recently wrote about his experiences on the Caucasian Challenge. He can’t resist the charms of Central Asia, so he’s back to do it all again this year. Here’s his story (back when the race started in Budapest, not Astrakhan): 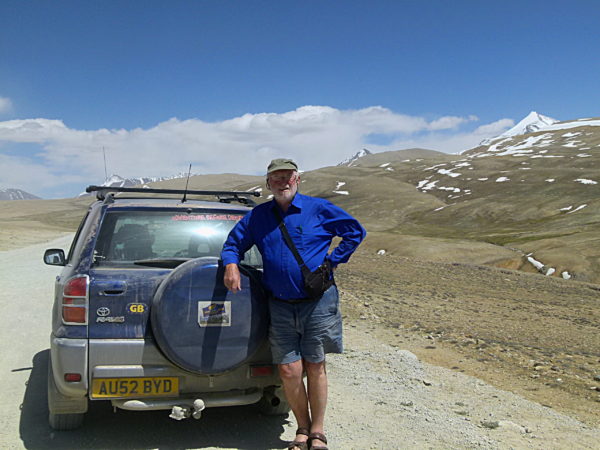 “Yes we can” I told Beryl, my long-suffering wife of nearly 50 years, as she voiced fears about participating in the 2014 Central Asia Rally. “And you know I hate heights” she added, remembering the route went over the Pamir mountains. I needed help. I persuaded the ever patient Attila, the rally coordinator, to speak to Beryl over the phone. “You will have the trip of your life”, he promised, “and when you get back you will tell your friends about the adventure.” He was right: very soon after returning to our Yorkshire home she started talking about it excitedly to incredulous woman friends, two or three of whom made it clear that they would have done the trip if they had had the chance.

Her courage was boosted at the start of the rally in Budapest when she met the other British team, Imogen and Emma. And she certainly warmed to Attila’s group of cheerful Hungarian adventurers. More teams joined us at the next stop, in Rivne, Ukraine. They were the “Polish Girls”, Christina and her quick-witted daughter Aisha; and Dirk and Steyn from Brussels who had an enormous amount of canned beer stored where the spare wheel should have been. Finally, two days later, we were joined in Astrakhan by the Canadian team, and a Finnish group led by veteran rally driver Tomas. So off we all drove into Kazakhstan. Very quickly, our Toyota RAV4 shared deteriorating roads and increasingly scarce fuel supplies with the other vehicles. 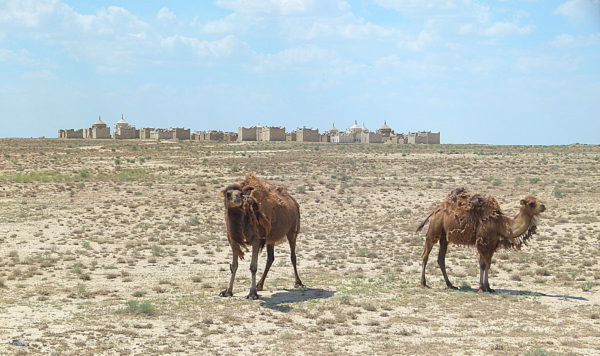 Humour quickly established itself as the default social position, no matter local difficulties encountered at borders and police posts where “facilitation” payments had to be made (“you have a choice, the easy way and the hard way” were the commonest words used). “We have the same bribes in Canada“, said Jack, “only there they are called sales taxes”. Comparing experiences every evening became hilarious over glasses of beer. 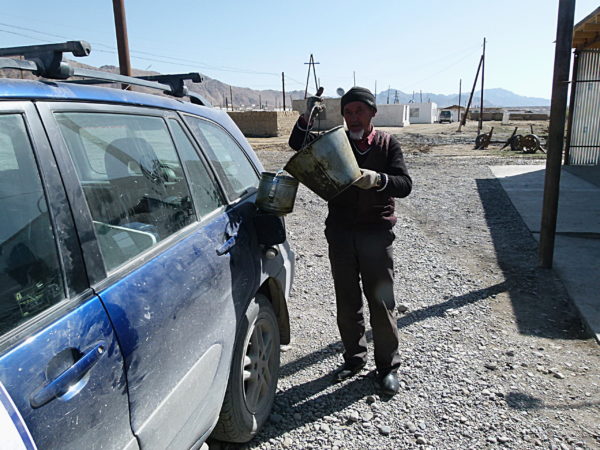 The fuel problem worsened in Uzbekistan as virtually all the fuel stations were closed. The official excuse was that it was harvest time. “Have you seen any tractors or any harvesting activity?”, everyone asked each other. Shaking heads all round. Diesel could only be obtained from houses which had a bottle by the gate. A bucket and funnel would then appear. It sounds worse than what it actually was; and the telling of the stories around our fuel adventures demanded even more beer in the evening. Our favourite story was having to siphon off diesel from a large truck in exchange for dollars, at midnight. 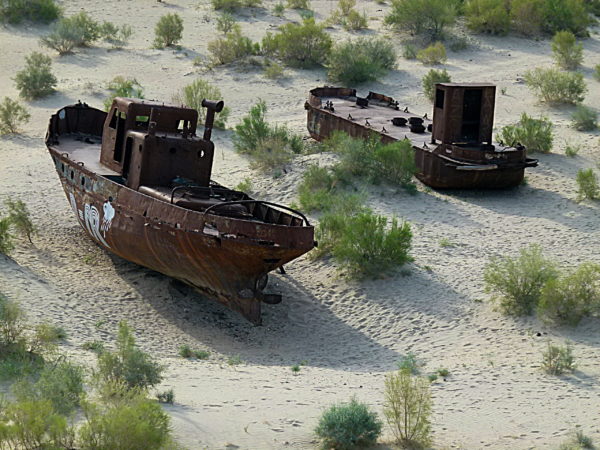 “We are now going to somewhere rather shocking“, warned Attila, as we headed through the desert to the Aral Sea, or rather a sea of sand with stranded rust-pitted ships. It was a truly astonishing sight, the result of socialist central planning, ignorant of local environmental circumstances, taking water away to feed water-starved cotton plantations. With the vista spread before us, not a word was said. 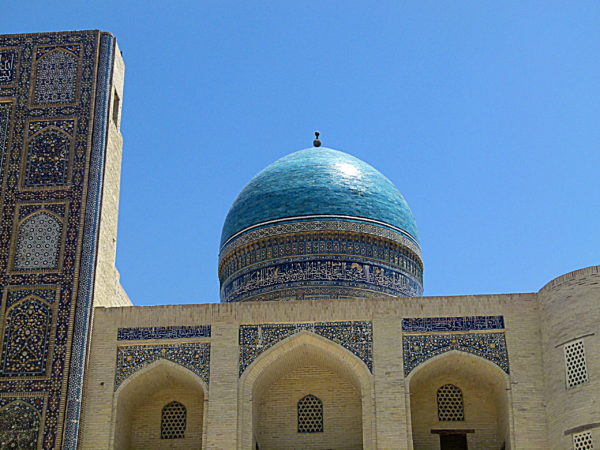 The first important stop was Bukhara. Arriving at the entrance to the great marketplace all the girls in the rally began dancing, soon attracting a bemused crowd of curious onlookers. “I’m too old to do this” said Beryl, as she led the clapping on the sideline. And of course there was the inevitable party in the evening in our delightfully furnished hotel, tucked up against the massive defensive walls of the Islamic city.

Two days later we were on the way to fascinating Samarkand and then to Dushanbe, the tree-lined capital of Tajikistan. The real challenge of the journey now faced us: driving through increasingly wild country and the Pamir mountains, and fording rapid flowing rivers. “You should be able to cover 25 km every hour” advised Attila, optimistically. Fuel availability was much better but the road to Khorog on the Afghan border worsened. Not only that, it was the time of year when huge numbers of sheep and goats were being driven to high altitudes for the summer pastures. Extraordinary sights of men and boys – all natural horsemen – shepherding the flocks, brought the cameras out. 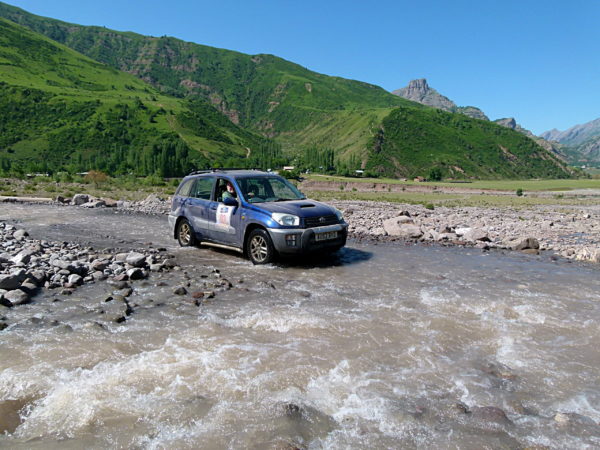 Thereafter, the route twisted its way through a very lengthy gorge, with Afghanistan on the other side of a raging river, with us driving along a deeply pitted road trying to avoid huge Chinese articulated lorries. Every now and then, you had to stop simply to take your breath. “This is what I call real adventure” said Tomas. In a rare instance of fairly flat land, we suddenly saw watchtowers and then miles of high fencing. “That’s the Chinese border!” exclaimed Beryl. It was only then that we all realised how far from home we were. 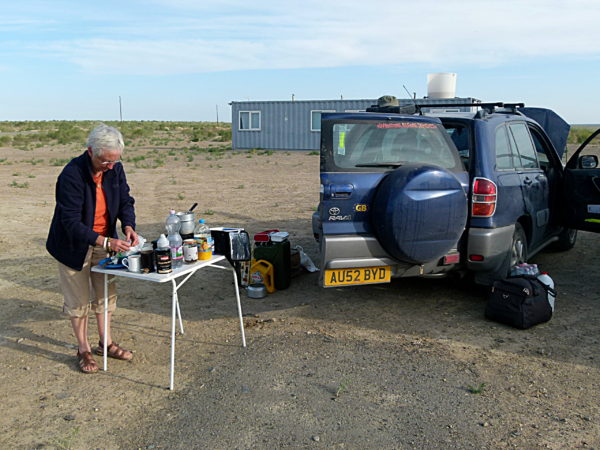 More high mountains, sheer drops and snow, had to be tackled before reaching the high altitude grasslands of Kyrgyzstan. Now yurts rather than houses predominated. Only one more obstacle: political demonstrations closed the road to Osh. But patience and smiles won the day and we were off to Bishkek and the end of the rally. “I knew I could do it all along“, confided Beryl, as she sipped wine by the poolside. 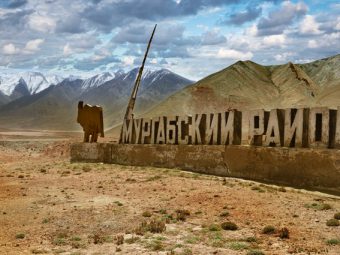