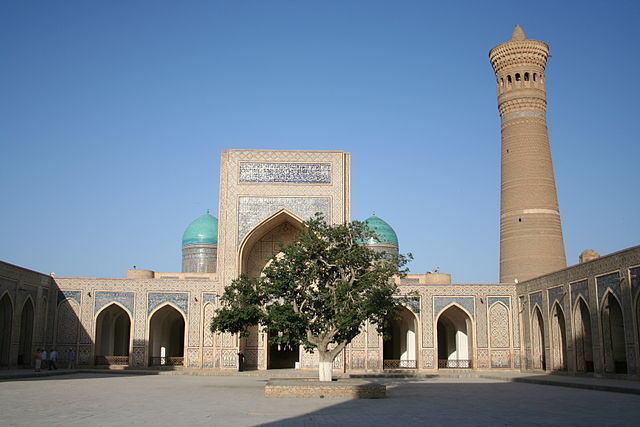 A labyrinth dotted with medressas, minarets, and the remains of its once vast Silk Road market complex, Bukhara is a city that captures Uzbekistan’s spirit. While most of Central Asia still carries the echoes of its Soviet past, for those looking to see Uzbekistan’s Turkestan heritage should make a bee-line to Bukhara.

Samarkand might be the touristic star of the country, but Bukhara’s subtlety and atmosphere make up for it, and being a little more off the radar adds to the city’s charm.

Today, you can still see fragments of the stone pools and network of canals that watered the city’s population at the time, although the often stagnant water meant many Bukharans were dead by 32.

In the heart of Bukhara, the Ark is one of the prime sites to explore. It’s a town-within-a-town, and is the city’s oldest structure, having been occupied as far back as the 5th century, and even saw residents up into the early 20th century until the Red Army bombed it.

The former royal town lies mostly in ruins, but you can find museums and sites that are still worth visiting.

This is one of Bukhara’s most unique monuments, sandwiched in a maze of alleys between Hoja Nurabad and Pushkin. Its style is rather unusual in that it resembles a more Indian aesthetic than Uzbek, but it carries the signature turquoise blue we’ve come to associate with the country. The name “Char Minar” doesn’t come from Uzbek, but actually means “Four Minarets” in Tajik, however the blue topped turrets are simply decorative towers, not minarets.

When the Kalon Minaret was built in the 12th century it was the tallest building in Central Asia at 47m tall, as well as 10m going down into the ground as foundations. This minaret is a work of art with 14 ornamental bands spiralling up. Even though the neighbouring mosque was destroyed by Genghis Khan, later replaced by the 16th century mosque we see today, the tower was so impressive he ordered the tower to be spared.

This plaza built around the 17th century pool is a perfect example of Bukhara’s former water supply and culture. Bukhara was once full of a network of channels and pools that functioned as the city’s water supply. Today, it’s no longer in use the same way, but today it’s a peaceful spot frequented by the locals who like to come and sip tea and play chess under the mulberry trees dotted around the pool. Lyabi-Hauz retains Bukhara’s old world charm and has not been overly polished the way Samarkand’s Registan has been.

This mosque is particularly interesting since it’s the region’s oldest surviving mosque. Tucked in between Central Asian bazaars, this eclectic structure is a mix up of the original 9th century exterior and its 16th century reconstruction. In fact, the mosque’s location was found to be set on top of a 5th century Zoroastrian temple which was destroy, and apparently a Buddhist temple pre-dating that also stood here.

It’s considered one of Uzbekistan’s holiest spots, but today it’s home to a museum showcasing carpets and traditional Uzbek prayer mats, but if you can still see the old temple remains if you climb up to the top of the mosque. It was not only a holy place for Muslims, Buddhists and Zoroastrians, but even Bukhara’s Jews used the mosque as a synagogue in the evening.