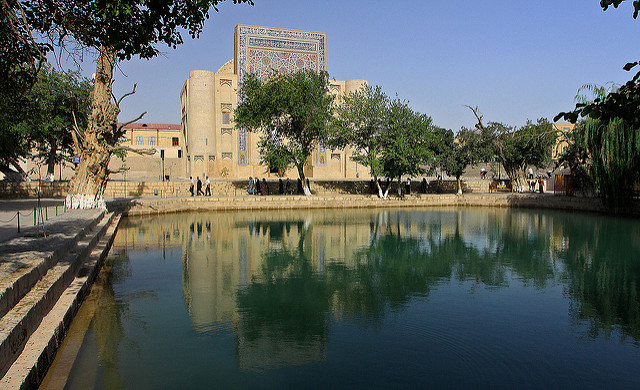 In Bukhara, a Hauz is outside…

In Persian culture, a Hauz is a pond. In Bukhara, which we visit on the Central Asia Rally, the Lyab-i Hauz is the area around the one of these ponds, famed for its tranquility and architecture. It reveals a taste of Silk Road life from many centuries past.

Literally meaning “around the pool”, the Lyab-i Hauz area was built in the early 17th century, and remains one of the must-see sights in the historic city. For hundreds of years, it has been a place to relax, socialise, and play chess. Nowadays, it has been modernized somewhat, and tourists occupy the spots where once locals would have sipped tea. Music is played in the evening, but peace and quiet can still be found if you arrive early enough in the day.

Until Soviet times, the Lyabi-Hauz, while still notable for its beauty, fitted in perfectly with Bukhara as a whole. The city was once filled with canals and many more Hauz pools. These courtyard pools were the centerpiece of social life. However, the water often grew stagnant and thus spread disease. When the Soviets renovated the city, removing many of these Hauz, it wasn’t merely to install their idea of correct architecture, it was to rid the city its regular plagues.

The buildings that surround Lyba-i Hauz are remarkable, and are the reason that the Hauz has been allowed to remain untouched. The oldest, the Kukeldash Madrasah, was built in the 16th Century, and is the largest madrasah in the city. The next to be built, on the western side of the pond, was the Khanaka (a building designed for gatherings of Sufi brothers) of Nadir Divan-begi, which was the religious center of Bukhara for centuries. On the eastern side is the stunning Nadir Divan-begi Madrasah, also built in the early 17th Century, an example of the astonishing artistic creativity of the period.