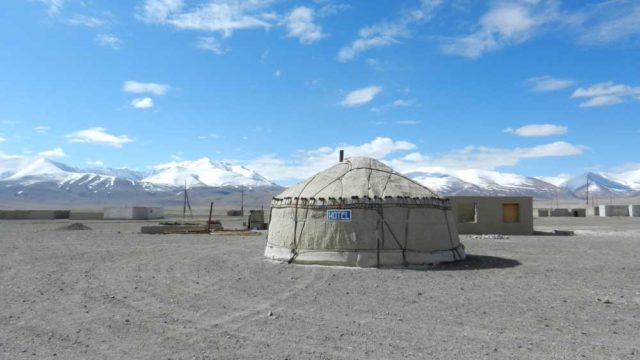 Yurts. Love them or hate them they are all over the place in Central Asia. The region simply would not be the same without these cylindrical structures set against dramatic scenery, from the high Pamir Mountains to endless steppes.

But how much do you know about yurts? Here are some fun facts about Central Asia’s most iconic dwelling.

The story of the yurt

Yurts are a great invention since they basically solved the need for lodging in a tough environment, not to mention they’re portable! The origin of the yurt is unclear, with a couple stories pinpointing their birth to two different regions – Mongolia and Siberia. Of course, since nomads were not the type to write down their history or leave much archaeological findings there is no way we can really be sure. However, bronze age etchings show yurts in use in Siberia, not to mention a cart found in the 2500 year-old grave in Pazarcyk in Southern Siberia came equipped with everything you needed to build a yurt. However, the Mongolia argument is also strong, since there is not much firm evidence around that proves the existence of yurts before Ghengis Khan.

How do you put up a yurt?

These cylindrical tends are made by setting up wooden slat lattice walls that support sapling beams, which are held together at the top by a wooden ring. The beams actually exert pressure on the lattice walls, holding it in place, and are supported by the tension of the leather strapping that runs around the building’s perimeter. After the structure is set up, felted wool mats are laid over the framework and can be adjusted depending on the temperature. If it’s colder – add more mats, in the summer remove them.

The differences between gers and yurts

The word ‘yurt’ actually comes from the old Turkish word for ‘dwelling place’, and is not the original Mongolian name. The name for a yurt in Mongolian is actually ‘ger’.

There are some structural differences between the two though. The Mongolian ger has a heavier roof wheel and has straight roof ribs. The Turkic yurt has a bend in the roof ribs and the shape of the roof is also slightly steeper than in the ger.

Yurts take between half an hour to three hours to set up and take down. They are quite handy in their engineering because they were built with their environment in mind. The steppes are very windy biomes, since there are no trees, shrubs or even tall strands of grass to break the wind. The circular shape of the yurt allows the structure to resist the wind from any direction, where only the door area is vulnerable to strong gusts. For this reason, the doors are designed to be very strong, often made from a wooden frame, and even the door is made of wood. It’s also interesting to note that the aerodynamic shape of the yurt’s roof means the winds won’t likely tear off the roof beams.

Yurts spread the world over, thanks to Mongolian leader Ghengis Khan, who commanded his empire from a large ger. His empire stretched all across Central Asia, from Mongolia in the north, to the Korean peninsula. From China, Tibet and Iran over to Georgia and Russia, Ghengis Khan’s empire, and yurt culture spread throughout the kingdom. His own personal ger was mounted on a huge cart, where his yurt measured 9 meters in diameter and needed 22 oxen to pull it on the cart. The Mongol Empire also expanded to reach Eastern Europe to Turkey, Romania and Hungary, bringing the yurt culture as far as Europe. Even today you’ll still find some yurts in rural Hungary!

As you can see, yurts are marvels of engineering and a deep cultural root in Central Asia, so much so, that the Kyrgyz flag even has a yurt on its flag. So next time you’re invited into a yurt by Song Kul, remember all the amazing facts about this curious tent!