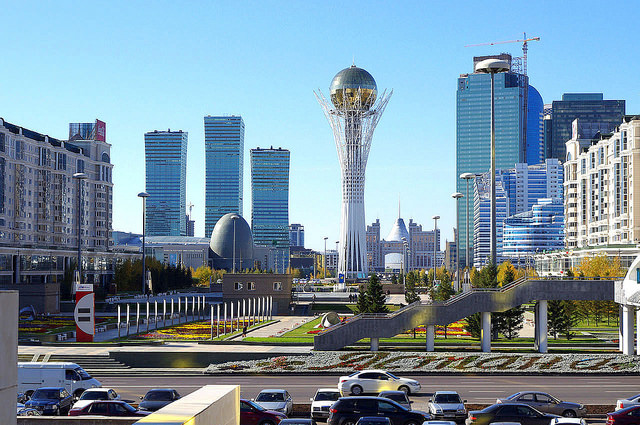 Walking around Kazakhstan’s new capital city you’ll feel almost like you’re in a wonderful surreal dream, like you’re Alice in Wonderland. Well, Astana’s magical architecture will do that to you.

Astana was named capital of Kazakhstan in 1998. Until then, the city was just a small outpost in the steppe. Now, however, the skyline is scattered with beautiful glass buildings, and all the colours of the rainbow – Astana has become modern and beautiful, just like any large metropolis in Asia.

When the modernization began, they brought in two great architectures, Kisho Kurokawa and Norman Foster to help form the skyline to the futuristic wonder it is today.

The city becomes especially breath-taking at night, when all the vibrant lights are lit up – you’ll be walking through the buildings constantly looking upwards, completely mesmerized by the view.

The Golden Towers on Orynbor Street will remind you of golden silos meant to store some crops. They are right beside the entrance to the Presidential Palace and they are extremely hard to miss – in sunny weather, you’ll see them shining from afar. Ironically, the locals call them beer cans, undermining their intended glory when they were first installed.

Palace of Peace and Accord

Norman Foster dreamed up this pyramid structure. The building is 77 meters high and was designed to host the Congress of Leaders of World and Traditional Religions every three years. The design is similar to the interior of the New York UN Security Council Meeting Room.

Also planned by Norman Foster, this structure will remind you of a huge circus tent. In reality, it is a shopping mall. The interesting thing about this gigantic tent is that the roof is made of a quilted fabric that keeps the inside temperature around 25 and 30 degrees Celsius, which is great feature, since they have an artificial beach inside the mall. Oh, and did we mention that they imported sand from the Maldives for the mall’s beach?

Bayterek Tower symbolizes a tree with a nest at its top and an egg in the middle of it. It can be considered the centrepiece of the city, since you can see it towering over the skyline from wherever you go in Astana. Legend has it that Kazakhstan’s President, Nursultan Nazarbayev sketched the structure onto a cocktail napkin, so this building holds great importance.

This futuristic glass structure is really a statement; some people call it the dog bowl due to its shape, but it is so much more than that. The Palace of Arts is quite the cultural centre: you can find exhibitions, live performances, a huge library and even the school of fine arts is located here.

Remember those movies where there’s a new world order far, far in the future? With flying vehicles and strange clothes? Well, Ak Orda will remind you of a scene form such a Utopian movie. This building houses the presidential offices, although he doesn’t actually live there. The sphere right at the top of the building represents the sun, and we can see the silhouette of a Kazakh steppe eagle flying under it.

As you might suspect, you’re going to have to catch a glimpse of these amazing towers at night, since that is when they light up. No wonder they’re called Northern Lights; the waves of colour that wash through the buildings will remind you of the Aurora Borealis without doubt.

It is no secret that a huge portion of Kazakhstan’s income comes from gas and oil reserves found in the country. The state’s energy company, KazMunayGas designed its insanely large headquarters to look like a fortress at day, but when the sun goes down, the great big building becomes an astonishing sight with all the colourful lights and fountains located around it.

A concert hall is all about art, so it is fitting that the building looks something absolutely artistic and gorgeous. Designed by the Italian company Studio Nicoletti Associati, the Hall is shaped like a rose, with petals just opening up to show us the middle. Catch one of the performances, or just snap a couple of photos of it, you’ll be glad you decided to check it out.