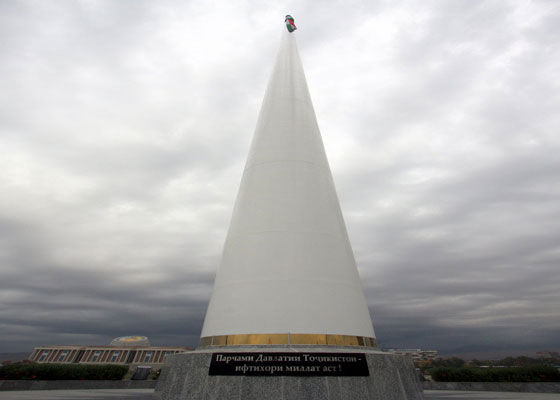 Central Asia. Cradle of high culture, higher mountains and, as of the early 2010s, of the world’s tallest flagpoles, the runner up of which, Dushanbe Flagpole, stands proud in Tajikistan’s capital, right in front of the Kohi Millat, a.k.a. the president’s exorbitant Palace of Nations complex in downtown Dushanbe.

The 165-meter (541 ft ) tall flagpole, soon after it was erected, entered the Guinness Book of Records as the world’s tallest in August of 2011, in time for the seismic frenzy that the celebrations of the country’s 20th anniversary of independence were the following month.

A San Diego-based company named Trident Support, who are also responsible for the record breaker’s runner up (and former champion of the world), the 531 ft. tall flagpole in Baku, Azerbaijan. The Dushanbe flagpole consists of 12-meter sections of steel tubing, which were assembled by crane. The massive mission took five months to complete; the national flag (itself weighing in at an eye-popping 350-kilograms and measuring 60 meters by 30 meters) was first test-hoisted up it in May, 2011, where it flew until April 2013, when strong winds tore it to pieces, calling for a somewhat harder wearing replacement.
This glitch aside, this symbol of national pride continued to tower over all others in the world right until 2014, when its, well, pole position was snatched by Saudi Arabia’s Jedda Flagpole, which measures in at a whopping 170 meters, and is also the handiwork of Trident Support Corporation.

Well, I’d imagine Trident have an appreciably more polite bank manager since then.

You could be right there. In total, the project cost Tajikistan $3.5 million, part of a trifling $210 million spent on construction to celebrate the 20th anniversary of the fledgling nation’s independence. But to put it in context, Baku’s National Flag Pole had somehow managed to set Azerbaijan back by some $24-million, so I guess Tajikistan got themselves a bargain there, as it were. It’s probably worth noting here that Tajikistan is Central Asia’s poorest country. Some $3 billion pouring in from Tajik migrant workers in Russia keeps the country’s economy from going down the drain and make up almost half of the country’s GDP.
At any rate, Trident are probably laughing all the way to the bank, yes. Although they originally started out as a defense logistics company, they have by now managed to corner the market on this niche of what’s been dubbed the “Middle Eastern dictator dick-measuring contest” since the early 2010s.

As long as the Tajik people support it, I suppose…

Quite. The people do appear to cherish their fledgling nation, as back in November 2009, a week after President Emomali Rahmon signed the law of National Flag Day, about 300 merry Tajik students carried a 90-meter-long flag through the main street in Dushanbe.
Those who’ve seen the Dushanbe Flagpole from the ground mostly agree that whether it occupies the runner-up position in the ever-intensifying flagpole lengthening contest of Central Asia for long, those 3 metres that separate it from topping its competitors are barely noticeable: the Dushanbe Flagpole makes for an awesome spectacle, especially when placed against the backdrop of Dushanbe’s unassuming low-rise cityscape.
Curious to go and check it out yourself? Come join us on our next Central Asia Rally.