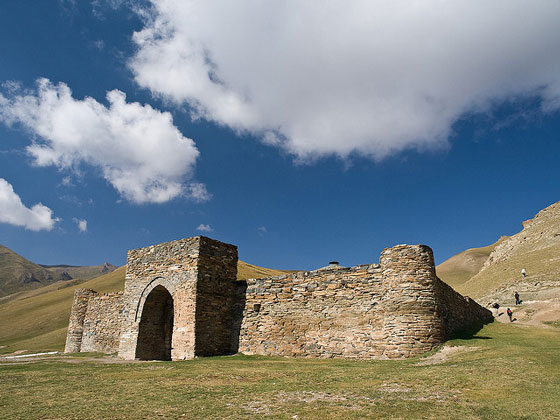 Say “Silk Road” and most of us see soft focus pictures of camels, flowing garments, and romantically drifting sand dunes, perhaps with a bit of low-key throat singing in the background. But this romanticized portrayal airbrushes out the real dangers that the journey entailed, for the Silk Road crossed some of the most treacherous regions imaginable, where many travelers died en route. Also, the Silk Road was not a single route, but a network of several established tracks, each with its own fair share of threats.

News to me. So what role did caravanserais like Tash Rabat play?

They were a widespread network of traveler’s inns along old caravan roads, either built at cities along the way, or as outposts of civilization in remote regions, providing shelter from bandits and from the hostile natural environment. Tash Rabat was just such an outpost. Travelers who reached it had already crossed the dangerous Torugart Pass. Here, they could recharge for the next leg of their journey through the Tian Shan Mountains, to restock on food and water and to pray for a safe passage. Some historians have argued that Tash Rabat might have been a Buddhist or Christian monastery before it became a caravanserai, but there is little evidence to support their theory.

Inside the caravanserai there is little to do except wander aimlessly through the dark corridors, which are illuminated only by small openings in the roofs. These rather damp rooms and corridors, which include a well, a mosque and a dungeon, are extremely atmospheric, especially because it is quite likely that the few visitors to the site might have the place completely to themselves.

How many caravanserais survive to this day?

Silk Road caravanserais can still be seen all along the former Silk Road from the Mediterranean Coast to Central China. However, Tash Rabat stands out among the myriad of caravanserais with its isolated location in a meditative landscape; it also gives a good sense of how dangerous and difficult travel along the remote parts of the Silk Road must have been.

I see. I take it that it’s still not the easiest of journeys to make today.

Quite. Even today, with modern navigation systems and 4×4 vehicles, venturing out here is anything but straightforward. Firstly, snow blocks the road which connects it with the nearest town, At-Bashy, for up to eight months every year. Even without this, constant avalanches and landslides, not to mention regular floodings and earthquakes often turn the road into a mere suggestion. Because of this, the road leading to Tash Rabat should never beattempted without a local driver. Secondly, altitude sickness is another serious threat, as the caravanserai is built at a height of 3,500 meters. In case a sudden change in road conditions make a return journey impossible, yurt camps near Tash Rabat can provide temporary shelter. So now that you know the challenges that come with it, you can plan ahead and if or when you decide to make it a part of your Central Asia Rally.