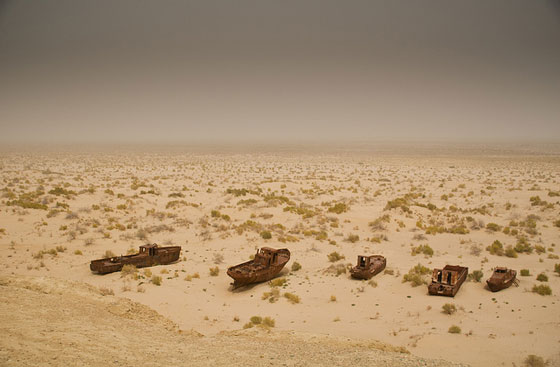 Have you marveled at the magnificent  turquoise domes and minarets of Samarkand, Bukhara and Khiva, and more ancient Silk Road cities in Uzbekistan, and wondered what might lie beyond the striking mosques, and madrasas? If so, the answer is a resounding yes. There’ plenty more to see in this amazing country, such as these five gems:

How the world’s second-largest collection of Russian avant-garde art got  to the innermost recesses of the Karakalpak Desert, we’ll never find out. But like a diamond in the dust, the Igor Savitsky Museum twinkles brightly, with works evincing the interplay of influences from East and West. Architecture and decorative arts evince the influence of Uzbekistan’s Islamic traditions: artists such as Koravay, Benkov, and Kashina depict the region’s ancient cities, while  Nikolayev masterfully blends the techniques of Russian iconography and Italian masters, and there are also works of Impressionism and Futurism. If all that wasn’t enough, the Igor Savitsky Museum also has one of the most impressive exhibitions of folk art and archaeological finds in central Asia.

This place is the harbour without a sea. In just fifty years, it has gone from being a wealthy fishing port on the edge of the Aral sea to a ghost town where ship skeletons lie broken in the desert. The receding of the Aral Sea is one of the world’s most visibly evident manmade environmental disasters, and nowhere is its impact being felt more strongly than in Moynaq. Coming here is what you’d call ‘disaster tourism’: there are parallels to be drawn with the Chernoby. You get to see where the sea had once been, and the suffering it has left behind: the ships’ graveyard, where various rusting hulks of former fishing vessels have been gathered from elsewhere in the desert to create a tourist attraction.

This you’ll find in Kokand, arguably the most attractive city in the Fergana Valley; quite fittingly, it is home to this building, one of the most jaw-dropping royal residences in central Asia. The Khudayar Khan Palace is an edifice that would make fairytale princesses jump up and down with joy. It was commissioned by Khudayar Khan at the end of the 19th century, just before the Russians shut down his architectural (and political) ambitions. The sumptuous palace’s first incarnation boasted 113 rooms set around seven courtyards. Now only 19 rooms remain, but walking here you gain a fascinating insight into the life of an oriental despot just before everything around him came crashing down: it is a palace built on the cusp of two historical eras.

The gorgeous turquoise tiles of the Registan and Shah-i Zinda often steal the show in Samarkand, but you should not miss this giant astronomical observatory either, the largest one in the world when it was built. Ulug Beg’s Observatory lay forgotten and dilapidated for some five hundred years before its partial restoration. The main focal point of the observatory, rediscovered and unearthed by a Russian archaeologist in at the beginning og the twentieth century, is part of a 63-metre-long quadrant arc which was used to chart the progress of stars and planets across the sky. Using this arc, Samarkand’s medieval astronomer-astrologers created a star catalogue that charted the movements of 1,018 stars. Their catalogue was still known and studied in Oxford in the seventeenth century.

Most people who venture as far as Khorezm only visit Khiva, and are missing out on the string of fortresses that date from the early centuries BC that lie nearby, on the edge of the Kyzylkum Desert. Listed by UNESCO, the most impressive are the Koi Krylgan Kala mud-brick and the Toprak Kala, but  there are plenty of smaller ones too if you want to explore on your own on your Central Asia Rally. We recommend you stay on site in the yurt camp beside the Ayaz Kala  to appreciate the site at both sunrise and sunset. Extra bonus: you can take a camel ride from the yurt camp here, too.