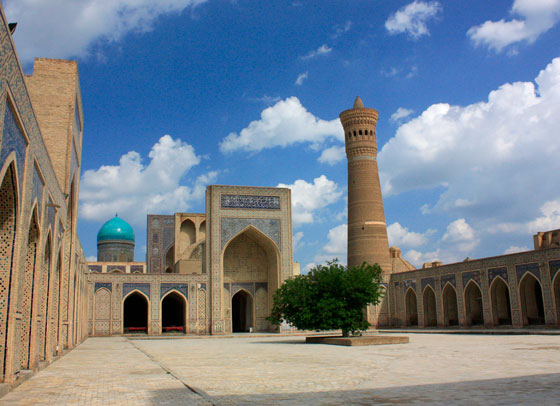 Hot on the tails of our last post on the magnificent feats of architecture that the madrashas – ancient institutions of higher education – of the Middle East are, today we turn our gaze to a particularly splendid example, the Miri-Arab of Bukhara, together with two other iconic pieces that comprise the complex in central Bukhara, known as the Poi-Kalyan (which stands for “Foot of the Great”).

The Madrasah Miri Arab inside and out

There is no two ways about it, this rectangular building is a true masterpiece of medieval Islamic architecture. Its imposing portal  on the main façade alone inspires scores of travelers to visit it every year. One look at its elaborately decorated blue-hue tiled surface and you’ll see why.  But it doesn’t stop there: the arches and walls of the building are awash with fancy geometric patterns formed from glazed bricks.

The main portal of the madrasah is also the gateway to an entrance leading to the lobby. Inside, there are classrooms, or darshanas  for students at each corner. The entire edifice of the Madrasah takes up  half of the building complex of the Poi-Kalyan of Bukhara; it is second-largest in size (after madrasah Kukeldash) madrasah in the city.

So what should I know about the Poi-Kalyan?

The complex is found in the historic part of the city. It’s not the first structure of its kind to have been built here: several ensembles of main mosques were constructed here since 713, to the south of the Ark citadel, which were all destroyed by invaders – the most famous, and devastating one being Genghis Khan in the 12th century. According to legend, the fearsome conqueror spared just one piece of  ensemble he found here – the Kalyan minaret – because when he walked right up to it and lifted his gaze to the very top of the column, the movement of his head caused his his hat to fall off. Genghis Khan then took this as a sign that the minaret was to be spared.

What are the Kalyan minaret’s dimensions?

It’s a massive circular vertical brick tower. It stands 48 meters (149.61 feet) tall, with a trunk tapering from a 9-meter (29.53 foot) diameter at the bottom to six meters (19.69 feet) at the top. A brick spiral staircase twists tightly up inside around the pillar.

What was it used for?

Normally, as you know, the main function of a minaret  is to provide a vantage point from which the muezzin can call people to prayer. The word minaret is comes from the Arabic word manara, meaning lighthouse.  The idea for the minarets in Islam might have come from from  lighthouses of previous historical ages. So initially, in the first few years after its construction in 1127, it was almost certainly used to call the Muslim faithful in the city to prayer five times a day, and of course as an observatory for studying the night sky.

But there is more to it, isn’t there?

There is. Although looking at its ornate gallery at its top, and elaborate designs covering its entire  exterior, the tower does not betray its far more sinister second function: to send convicted criminals tumbling to their deaths from its gallery to the stone courtyard below. Fortunately, this is well in the past: no executions have taken place here since 1920, the Russian revolution.

Okay. What is the third building in the complex?

The Mosque Kalayn, the main cathedral mosque of Bukhara. It’s one of the oldest mosques in Central Asia, and the second largest one after Samarkand Bibi Khanum Mosque. It was built at the beginning of the 1400s. The edifice has a giant courtyard, surrounded by square columns, galleries, and covered with domes. Its walls are covered with inscriptions from the Koran, and there is room for as many as ten thousand people inside!

Wow. And Bukhara is one of the stops on your rally?

Indeed. Bukhara is the fifth stop in our Central Asia Rally. See on the route plan here.