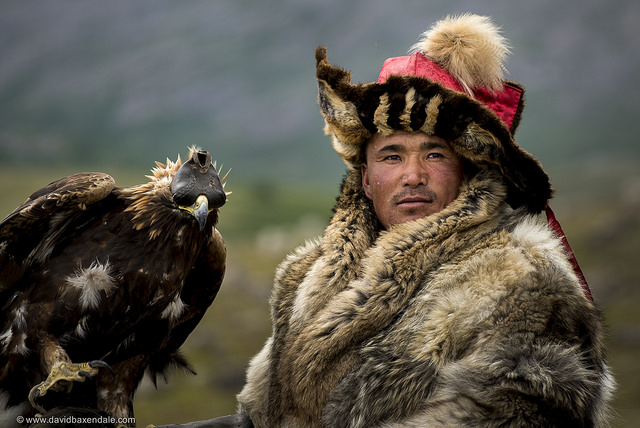 Falconry is a respectable and spectacular tradition, and hunting with eagles is the top of that sport. Though hundreds of years past its peak in the Western world, if a handler appears in a Renaissance fair with his majestic bird of prey, he will definitely steal the show from even the best of fire-jugglers. People are fascinated by these free and powerful birds, and how these rulers of the air can be controlled by the strong will of an expert handler. Not a freak show, like the circus, but subduing the best of the air, to serve man with what it’s best at. Until someone develops fishing with a trained shark, this kind of hunting will be the non plus ultra of animal handling.

Hunting with Eagles – the Golf Club Membership of Our Ancestors

Hunting with trained predatory birds is  believed to be dating back to ancient Mesopotamia, almost 4,000 years ago. It gained popularity in China and the wide-open Asian steppes, and said to have arrived in Europe brought by Attila and the Huns. The Christian nobility took up the sport after the Crusades, where they learned it from the Arabs. The popularity of the sport peaked around the 16th-17th century, since then it is only the passion of a selected few enthusiasts. Passion, because it is much more than a pastime – training and hunting with an eagle is an occupation for every day, and cannot be done – or enjoyed – without full commitment.

It was never an efficient way of hunting, and it was never intended to be. Expensive and incidental, it was the passion of the ruling class. Who else could command the most free of the animals, than one who is used to commanding people? And who else could afford feeding a pound of meat to a bird every day, all year? Falconry was for Mongol khans, European aristocrats, Arab princes and Chinese mandarins, not the common people. But relatively speaking it didn’t cost more than an exclusive golf club membership now. And what is more fun, riding in the wide open plains, with the peak of evolution on your arm, or riding around in a whirring little white cart?

Where Hunting with Eagles is the Identity

There is an exception to both the decline and the exclusiveness. The Central Asia rally takes you to Kazakhstan, where falconry is an essential part of national identity. It is not only widely practiced, but like many traditions oppressed under Communist rule, is on the rise again. It is the area where the borders of Kazakhstan, Russia, Mongolia and China meet, and nomadic Kazakhs ran to from Soviet rule. They took their traditions with them, and now this exile assures the survival of the ancient sport.

People practice falconry with all kinds of birds of prey here, too, but most respected are the qusbegi. The word means „Lord of birds”, and refers to the golden eagle, the largest and strongest species of raptors man could tame. These majestic birds can weigh up to 15 pounds (7 kgs) and have a wingspan of three feet (1m). The species has a special significance in Kazakh culture, appearing the earliest written records, as well as folk arts and ancient tales.

Is Hunting with Eagles Harmful To Nature Then?

Modern states have a complicated relationship with eagle hunting: On the one hand they promote the tradition, organize eagle festivals, where riders compete and show off their birds’ skills to spectators. This is an increasing touristic attraction for this otherwise undeveloped and remote area. Mind you, even to these mountain people hunting with eagles is more like a passionate hobby, than an actual way of hunting. Men will go to great expense to keep an eagle and go hunt, even if they don’t catch anything.

On the other hand modern states ban the practice of hunting itself, citing conservation as the reason. The population of the main game of qusbegi, the corsac fox dropped significantly, though the species is still not endangered. They are hunted for their excellent winter fur. The reason they quote for the ban is to protect the golden eagle, but then again – they don’t enforce the ban. In theory, a policeman should arrest every competitor at a golden eagle festival, which of course they don’t, although China has been making the life of qusbegi in the past few years difficult.

Why the Tradition May be Good for the Eagles

Those hunting with eagles follow a strict code, and claim they are vital to the preservation of this highly endangered species. They capture young eagles (preferably females, which are bigger and stronger) ideally around the age of six. With an expert handler, after a few months of training they are ready to hunt. However, after ten years the eagles are released back into the wild to breed. Golden eagles can easily live past 30.

The released birds are strong, healthy specimens, which nevertheless didn’t lose the skill to hunt. Qusbegi say the species is a lot safer this way: There are slightly more birds than the ever-shrinking natural habitat could support, with a good deal of the population in safe care at any given time. Eagles who spent time with humans are more likely to breed in less isolated spots, too. So who is right?

It is easy to what fascinates Kazakhs about these birds. They are powerful and beautiful. To make them act so much against their nature is to prove man’s superiority every day. This might be an outdated view – captivating, nevertheless. For those concerned about these extraordinary birds, it can be reassuring, that as long as the traditions lives, the existance of the species is assured. Everybody can agree, that this noble and ancient tradition is worth preserving. Unless one’s a corsac fox.