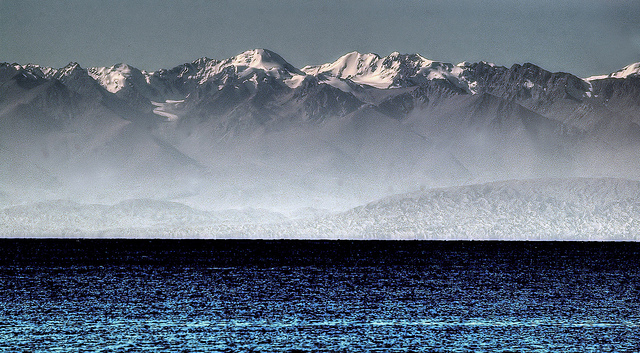 The world’s second largest Alpine lake (after Lake Titicaca, in the Andes), Lake Issyk-Kul — while it faces competition as Kyrgyzstan’s best lake — is certainly the Central Asia country’s largest. It’s also the second largest salt-water lake in the world, and the eleventh overall, according to water volume. With its stunning location, surrounded by rugged mountains, yet with plenty beaches on which to relax, the massive lake and its vivid blue water is one Kyrgyzstan’s top tourist attractions.

The Surprising Translation of Issyk-Kul

Issyk-Kul actually translates as “Hot Lake”, which is a rather optimistic description. It merely refers to the fact the lake never freezes, due to the water’s salt-content, even at it’s altitude of 1600 meters. However, it’s hardly a hot-tub, especially in winter. Even in summer it can take a brave soul to go for a swim, but many do! The lake has a surface are of over 6000 square km

How to Get to Issyk-Kul

Well, firstly: get to Kyrgzystan. If you’re on the Central Asia Rally it’s easy: the lake is en route. Even if not, though, it’s not too difficult. The lake is accessible by minibus from Bishkek’s Western bus station: you can arrange a ride for less than $5, while a privately hired taxi or van will cost a little more. In summer you can ride the train to Balykchy, on the Western shore of the lake. Departing early in the morning and returning in the afternoon, it’s worth a trip if at all possible for the scenic views from the mountain pass: even better, it’s very cheap.

What to Do at Issyk Kul

While there are many beach resorts dotting the lake shore, these aren’t always in the best conditions, with the effects of the any visitors rather noticeable. Perhaps a better use of one’s time is to use the lake a base for some of the most exciting hiking opportunities in central Asia. The close-by mountains are the perfect environment for a range of rare creates, including wild boar and snow leopards. Exotic flowers, glaciers, and fierce river can also be found. There are many activities in which visitors can indulge: horseback touring, climbing, cycling, or even hitting the water to windsurf.

One last reason that Issyk-kul could be Kyrgyzstan’s greatest lake is the wonderful sunsets. The intense blue of the water contrasts marvelously with the varied lights of the sky, while the vastness of the lake and the remoteness of the location combine to create an almost religious experience. Much recommended!

So, are you persuaded to see Kyrgyzstan’s best lake? If so, you can check it out while on the Central Asia Rally. This minimal assistance rally is the perfect way to explore the mysterious lands of Central Asia, departing from Astrakhan in Russia and ending up in Bishkek, the capital of Kyrgyzstan. On the way you’ll see Uzbekistan, Tajikistan, Kazakhstan, and even (briefly Afghanistan) while exploring the region’s ancient history, incredible scenery, and unexpected hospitality.