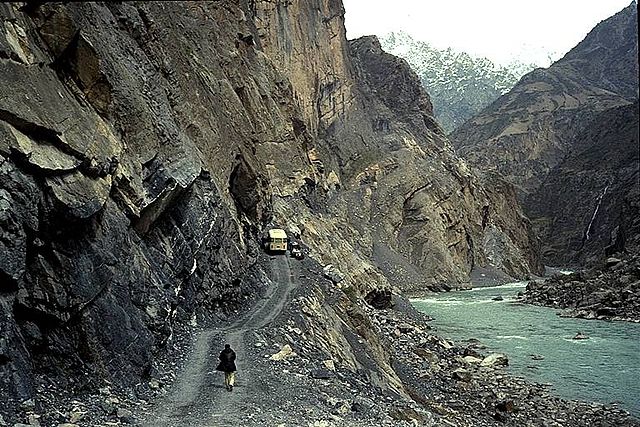 Running along the rooftop of the world, the Pamir Highway is a road like no other. Officially named the M41 Highway, the road traversing the Pamir Mountains was a piece of Soviet Engineering set in place to facilitate troops, transport and provisions to the wilder regions of the Soviet Empire.

This route links up northern Afghanistan with Kyrgyzstan, and also passes through Uzbekistan and Tajikistan as well, however the most travelers taking the famous, yet dangerous highway, will begin the route at Khorog or Dushanbe in Tajikistan and continue onto Osh in Kyrgyzstan.

Second highest highway in the world

With an altitude of 4655m above sea level, it’s the second highest highway in the world after the one at Karakorum.

Even with its high altitude and snow, the highway is open all year, however, travelers need to take care since the road is closed in extreme weather, which happens frequently in the winter months.

Until recent years, this highway was off-limits to travelers, but now it’s one of Central Asia’s main draws, with its high plateau scenery filled with mountainous lakes and traditional yurts.

Not shy of extremes, the Pamir Mountain range can see temperatures of +35ºC to -40ºC depending on the time of year. The terrain ranges from towering peaks going up to 7000m, as well as high altitude desert plains.

The Pamir Highway is an attraction for adventure travelers, not only for its natural beauty, but also for the risky driving.

You’ll need a 4×4 to navigate the mountain roads in the Pamir Mountains, and while most of the road is paved between Khorog and Osh, the mountain passes are a thread of hairpin bends set on a dirt track.

Today’s road was constructed in the 1930s, although tracks have been used for centuries, and in parts it feels like some of it hasn’t been repaired since those dates. The road in the mountain is mostly unpaved, and erosion, earthquakes, landslides and avalanches have damaged sections of the paved road.

To make matters worse, it’s mostly a one-lane road in parts, which is particularly dicey when you’ve got Chinese lorries to contend with on pass.

Because there are no barriers between you and a 1000m-drop, any driving mistake can have dangerous and even deadly consequences.

The extreme temperature changes and the volatile climate make it a road where you have more than just crumbling gravel or pothole-laden tarmac to contend with.

The M41 might have been built by the Soviets, but the road itself is ancient. It once made up an important link on the iconic Silk Road, connecting China with Europe, and the current highway retraces the original paths forged by the ancient trade route.

Geographically, the Pamir Mountain range is an important one, since it links the Tian Shan, Himalayas and Hindu Kush mountains, all of which acted as natural boundaries for China, Tibet, India and Central Asia.

However, the route’s Silk Road heritage still echoes today in the ancient cliff top fortresses dotting the highway and the ruins of the ancient caravanserais.

Sites on the Pamir Highway

Apart from the main cities, like Osh, there are some curiosities to be found along the historic route.

The Wakhan Valley, which lies on the border between Tajikistan and Afghanistan, makes it into Marco Polo’s accounts for the region’s famous gem mines.

Karakul Lake lies at 3960m above sea level in the Pamir Mountains. The lake is a former meteorite impact crater, now filled with water believed to come from an underground source.

However, the Pamir Highway is not about the sites, but rather the journey, and is a must visit for those looking to explore the true heart of Central Asia.