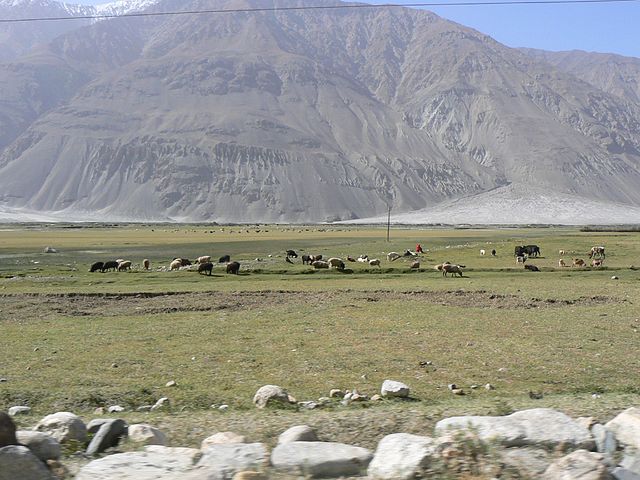 The market town of Ishkashim opens up with its weekend bazaar, allowing visitors to cross the border from neighboring Tajikistan without a visa, but more adventurous travellers opt to travel into the heart of the Wakhan Corridor.

The Wakhan Corridor, punctuated with jagged snow-caped peaks of the Hindu Kush and Karakorum mountains, lies quietly between Tajikistan and Pakistan, and ends at the border with China, which is still closed today. This long narrow strip of land once functioned as buffer between the British and Russian Empires, but now it’s a remote outpost devoid of roads beyond dirt tracks, an impoverished part of an already poor country, home to the Wakhi people and Kyrgyz herders.

Ishkashim lies across the border from Tajikistan, besides the town of the same name in the neighboring country. Separated by the administrative border and the Panj River, the two towns are linked together by a bridge.

Although entering this remote market town at the start of the Wakhan Corridor means leaving Tajikistan and entering Afghanistan, a day at the market won’t cost a pack of camels in terms of visas.

Sometimes the border closes and reopens at a moment’s notice, and the volatility of the border crossings are easier to gauge from Lonely Planet’s forum more reliably than on the Tajik tourism site, but on days when the border is safely open, crossing into Afghanistan for the day is simply a matter of leaving the passports behind with the guards and picking them up on the return into Tajikistan. This saves all the hassle of having to get a double entry visa into Tajikistan and a difficult to obtain visa to Afghanistan.

The Afghan market sits on a piece of no man’s land between the border control, connecting the Tajik and Afghan communities in the area. It’s the ideal place to come and haggle and mingle with the locals, view all kinds of curiosities and see a raw side of Central Asia that has hardly been touched by the modern world.

The weekend market at Ishkashim might be welcoming and relaxed, but anything can happen in this part of the world, so it’s best to keep your wits about you.

As the rest of Afghanistan endured years of war, the region of the Wakhan Corridor has been spared the violence suffered by the rest of the country.

With no proper road, minimal cellphone coverage and basic medical and educational facilities, the Wakhan Corridor is as remote as they come.

Towards the closed border with China, herds of Kyrgyz nomads carry yurts with them from place to place, trading in sheep. This narrow strip of land was never considered a proper part of Afghanistan, since its creation was to act as a buffer zone in the early 20th century.

But today the region’s natural beauty attracts the more adventurous traveler. The valley spills over into Tajikistan, and many tourists opt to explore this side due to the better infrastructure.

On the Afghan side, it’s possible to rent a 4WD to reach the last village accessible on the road in the valley, but further on you’ll need to travel by animal packs.

To get into Afghanistan, you’ll need to go through the same border crossing at Ishkashim, but you’ll need all the official visas and permissions, which varies from country to country.

Apart from the excitement peppered with element of danger, there are many reasons to visit the Wakhan Corridor. It’s high mountains, lush valleys and warm local life rich in a culture that hasn’t changed for centuries make it a place to visit with a difference. You can find real adventure here, along with stunning hikes, mountaineering treks and life in the remote outdoors.