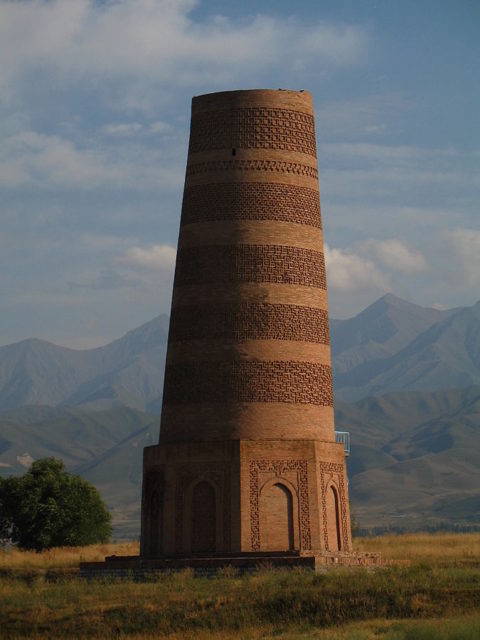 In the fertile Chuy Valley in Northern Kyrgyzstan, surrounded by the Tian-Shan Mountains, lies one of the country’s most famous archaeological sites.

Burana is best known for its tower, a minaret that has been damaged by an earthquake that cut it down from being a towering 45 meters to 25. But the surrounding city rubble still echoes the past with castle ruins, mausoleums, earthworks and grave markers. The tower lies in an ancient city that was once Silk Road hub that died down in the 15th century, eventually crumbling into the ruins we have today.

The ancient city of Balasagun

The city’s name was Balasagun, which was founded by the people known as the sogdians in the 6th-7th centuries. The ancient city became a capital of the Karahanid khagnate, and was sophisticated for its time. There were all the necessary lines of communication needed for a developed city, like roads, water supply systems and social structures. Balasagun was sophisticated for its time, with running water coming from the foothills up to 20km away. The city prospered as a hub on the Silk Road, being located on the cross roads of active trade routes coming and going to different countries on the Silk Route.

The story of the minaret

One of the curiosities about Balasagun was that the Karajanids were the first people in Central Asia to accept and practice Islam. The famous Burana minaret was built inside the ancient city in the 11th century, and became the first minaret in Central Asia.

In fact, the name “Burana” comes from the word for minaret “Monara”, believed to have originated from wrongly pronouncing the word.

The minaret once towered above 45 meters, but today stands only at 25 meters. An earthquake in the 15th century destroyed the top half of the tower that stands in the ruined city today.

Balasagun is a city that lost its importance in the 15th century, as the Silk Road was on its demise around that time, so people began to leave the city. Its municipal buildings turned into ruin and eventually the city name was forgotten. Some archaeologists believe that a large portion of the residents also died from a plague that rampaged through the city in the 15th century, contributing to its demise.

Today, most of the city buildings lie in rubble, except the minaret, which was renovated in the 1970s.

The Legend of the tower of Burana

The Burana tower is shrouded in legend about a local king who was warned that his daughter would die by the time she reached the age of eighteen.

The father, in a bid to protect his daughter, supposedly built a tall tower where he hid the girl. She wasn’t allowed to leave, and only a servant came in everyday with her food.

The girl grew up, but the prophecy came true as a poisonous spider, which had been hidden in her food brought to her by the servant, bit the girl. She died in the tower at the age of eighteen as prophesised.

But the local legend is simply just that – another legend, since the tower in Burana was simply a minaret. Either way, we like to drop by Burana on our way to Bishkek at the end of the Central Asia Rally for a spot of history.