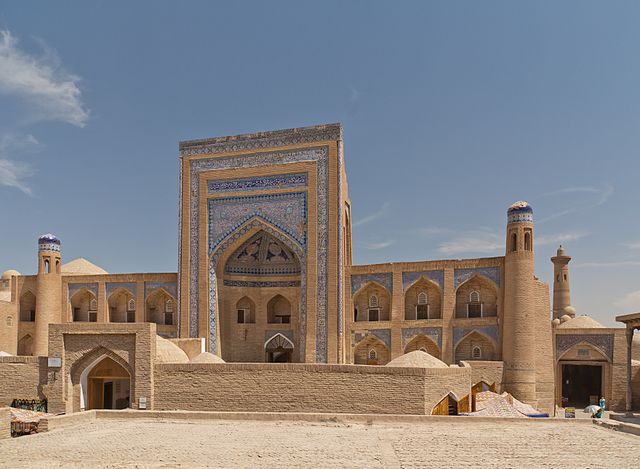 When its has such beautiful cities like Samarkand and Bukhara to contend with as sisters, Khiva is the city often forgotten on the Silk Road itinerary, or at least the one that would not get the “fairest of them all” where Uzbek cities are concerned. But, there is a certain je ne sais qois about Khiva, giving her a dark allure the other cities seem to have missing.

We feel that it’s best to visit Khiva first, especially for first time visitors to Uzbekistan as a build up for other stunning places we’ll see on the way. However, Khiva is full of surprises, so instead of giving a list of “must-see” sites, we’re going to look at unusual facts and figures about this mysterious city.

A den for the Silk Road slave-traders

When the image of the Silk Road is evoked in our imaginations, we picture caravans strolling through endless deserts carrying luxurious silks and spices with them from far off lands. However, there was a dark side of the historic trade route, and Khiva played a part of that.

While Samarkand enjoyed its role as the cultural capital of the region, Khiva was a place good folk wanted to avoid, being a den of iniquity harbouring the hub of the human slave trade. Today the slave caravans have been replaced by tourist buses, but take a walk through the old town and just imagine what Khiva’s slave market would have been like as you walk through the quiet streets.

Perhaps not unique when it comes to an ancient city that still has a substantial population, but Khiva is split into two sections. One is known as Ichon-Qala, denoting the ancient part of the city within the ancient city walls, and Dichon-Qala is the modern part outside the wall, where most of the population live today.

The old city, Ichon-Qala is often referred to a living museum, where you’ll find an abundance of historic monuments but virtually no one lives there. Some dislike Khiva for this eerie silence, but we think it captures the city’s haunted past.

No cabs in the old town

Inside the old city walls you have to go entirely on foot. While this part of the city is frequently empty, most of Khiva’s hotels are based here. We personally love staying here in an old historical building in the Hotel Arqonchi, since it gives us a break from driving to see everything nearby.

However, even though you can technically take a car into the old town, you won’t find a cab here. They won’t come by or drop you off, so you’ll need to get used to walking around.

The tale of Kalta Minor Minaret

This gorgeous turquoise colored minaret will fill you with many surprises, from its intricate tiled colors to the fact it’s an unfinished cylinder that has become a symbol for the city. Despite its look, this minaret only commenced construction in 1855, by Mohammed Amin Khan, whose original mission was to build a minaret that would be so tall you could see it all the way to Bukhara. However, once the khan died in 1855, the structure was never finished.

Khiva’s location is in a hostile part of the planet, sandwiched between two vast deserts – the Kyzylkum and Karakum. The city itself was founded on an oasis, which is why it played such a key role in the era of the Silk Road. Today, it’s a sleepy city with a population of 40,000 located just 5 kilometers from the Turkmen border.