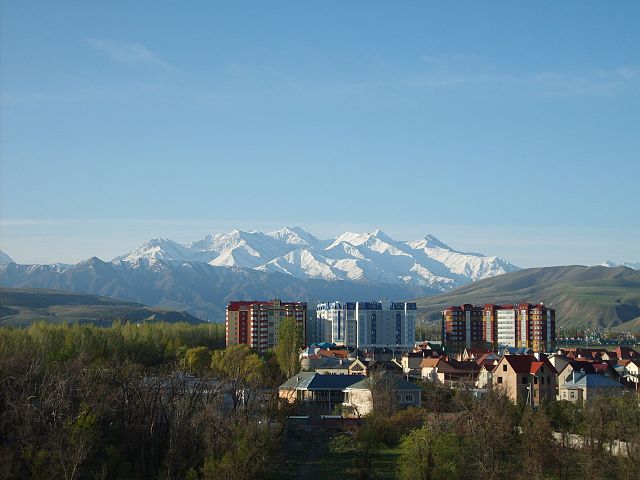 Bishkek doesn’t really have much of a reputation of being one of the premier world capitals, and is used more as a base from which to explore Kyrgyzstan. It’s easy to see why Bishkek fails to get the love, since it’s a new city full of Soviet era bleak concrete blocks, while lacking the sumptuous historic monuments you’ll find in Uzbek cities or the wide boulevards of Dushanbe.

But saying that we love Bishkek, and it’s been our port of call to end the Central Asia Rally in recent years. Apart from our post-rally partying, we think there is a lot to love about the Kyrgyz capital.

You might not know this, but Bishkek has quite the reputation for being a bad party boy. If you walk the streets of this city, you may hear of legends where people talk of carnage, debauchery and pools of vomit. Apparently Bishkek has mellowed out in its post-punk days, but it’s still possible to find some great bars and clubs round the city.

Check out some of the nocturnal venues like Bar Suk, the hangout for local 20 something, with a trendy, chill out vibe or for something grungier and odd, head to Metro, a bar shoved in the foyer of a grand Soviet era theatre.

See some of the sites

Bishkek is a rather nice city to wander around, since it’s abundant in leafy parks, with tall trees and Soviet monuments and statues dotted here and there. While Bishkek can technically be done in a day, it’s still a nice city to explore. Make a beeline to Ala-Too Square, the main square in the city, a vast Soviet expansion of concrete that was once named after Lenin. Since it’s become a site of demonstrations and outdoor festivals. Pop into the State Historical Museum to find out more about Kyrgyzstan, but for a view back into Soviet-era Kyrgyzstan, check out Panfilov Park. This amusement park is 100% vintage, but take the rides at your own risk – since the safety mechanisms don’t really seem entirely functional. But the wheel does give a gorgeous view of the city from above!

Bathe in the Zhirgal Banya

Driving through Central Asia certainly works up a sweat, and what better way to wash off the grime of the Pamirs than with a traditional bath? While the exterior is not the most aesthetically pleasing, even described by the Lonely Planet as looking like a “bad architectural joke”, you should pay the Zhirgal Banya a visit. It’s a great place to relax and release the tension, provided you’re not uncomfortable with public nudity. If you really want to go local, get yourself flogged with birch twigs in traditional Russian style!

You can’t come to Central Asia and not check out the markets! Being a hub on the Silk Road, you’d expect Bishkek to have some great places to do a spot of shopping.

Osh Bazaar is one of the most famous markets in the region, and while it’s not visually as exotic as other Central Asian markets, it’s a bustle of Kyrgyz life, where you can find traditional clothes, so if you want to buy an imitation ak kalpak hat or other pieces of nomadic fashion, then you’ll want to come here! You can find pretty much anything here, from clothes to food. Play mafia with your travel companions, get a fresh sheep’s head here and put it in someone’s bed, or simply snack on other Kyrgyz delicacies – it’s the best known food bazaar in the city, so come here on an empty stomach.

If you’re a hardcore shopper, pay a visit to Bishkek’s smaller markets, like the Dordoy Bazaar, the largest market in Central Asia for imports, mostly coming from China, but there are also the Alamedin and Ortosay bazaars.