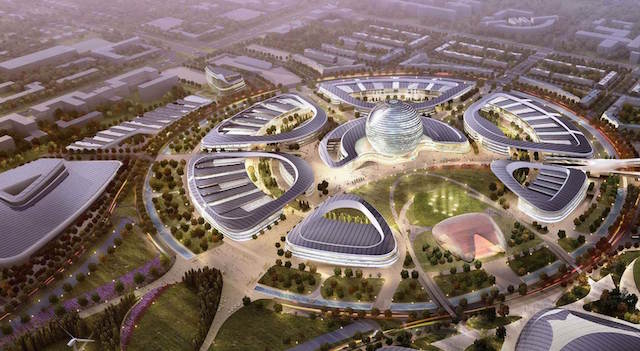 The architectural wonder of a capital city, Astana will host one of the most exciting and grandiose projects in the future: the construction of Expo City 2017 in Kazakhstan has already started.

The expo’s theme will be “Future Energy,” and it’s no surprise that it’ll be held in the Kazakhstani capital: with its futuristic, remote space city-like architecture, it is the perfect venue for such a forward-thinking event. The project’s main focus is on renewable energy and the usage of such energies as the primary source of power for major infrastructural elements. The expo will uncover some 429 acres of buildings that will function as power plants that will provide energy for the whole area – with the help of wind turbines and solar panels.

Expo City 2017 has been designed by renowned architectural firm Adrian Smith + Gordon Gill Architecture, and it really is impressive: apart from the clean energy power plants, the campus will include commercial areas, cultural, educational and civic pavilions and exhibitions. In the spirit of a green future, there will also be parks surrounding the futuristic buildings.

The Kazakhstan Pavilion will be at the centre of the whole campus, and this sphere-shaped building will be pretty impressive itself: its outer shell will be able to transform so as to reduce thermal loss and it will also diminish interior solar glares. The building will be constructed so that its energy output is maximized (through smart materials such as photovoltaics.)

Every single building on-campus will be built so that they require a small amount of energy to operate while at the same time generating a significant amount of clean-green energy. As Adrian Smith told Inhabitat, “The building forms are the direct result of a considerate and thorough design process, which AS+GG practices as ‘Form Follows Performance.”

After the expo goes down, the clean, green city area will be converted into an office and research complex for local and international companies.