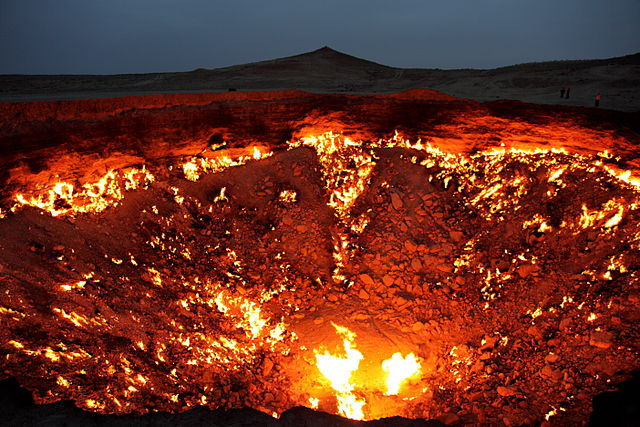 Central Asia is already a bizarre place in the world. For many it’s hidden land of legend, sounding like something out of an Indiana Jones movie or the homeland of a James Bond villain. But with the sweeping steppes, rolling deserts, high mountain peaks and deep lakes, Central Asia is an area rich in natural beauty, punctuated by Silk Road legendary cities like Bukhara and Samarkand.

But enough of that tourist spiel, from natural to made-made, we’re going to look at some of the weirder places in Central Asia, the stans!

Hidden up in the inaccessible Pamir Mountains, this lake is not what it seems. In 1911, an earthquake caused a crash in the mountain to create a natural dam now called the Usoi Dam. Today, this is the largest dam in the world, but because of Saraz Lake’s remote location, it took locals more than a month to learn of its existence.

The dam is flooded by glacial melt water and rain, but it’s a cause for concern since the dam is set in an earthquake zone, which could destroy the structure and release a catastrophic flood. Because of the narrow valleys in the Pamir Mountains, the water from the dam would be a danger to more than 5 million people, and would also be a disaster for those in neighbouring countries too.

One of the world’s greatest observatories lies hidden near Samarkand. This striking observatory was built in the 1420s under the rule of Ulugh Beg, who was the grandson of Tamerlane. Unfortunately, the learned ruler was not highly popular with the people, and upon his death the observatory was razed to the ground, and the scientists were driven away.

The observatory was forgotten for centuries, and faded into legend, until a Russian archaeologist uncovered the ruins in 1908.

The observatory was one of the most advanced of its kind, measuring the length of the year to an accuracy of 25 seconds. Also, the scientists at Ulugh Beg catalogued over 1000 stars in the sky, 200 years before the invention of the telescope.

The Silk Road is the soul of Central Asia, and the original route is rather romanticized, hiding the potential dangers that lay on the original route. However, sadly, many travelers died along the network of roads connecting China to the Europe.

Along the Silk Road, travelers could find refuge in Caravanserais, sheltering them from the weather and bandits.

After the dangerous Torugart Pass in today’s Tajikistan, the old Caravanserai served as a stopping point for travelers before they had to embark on the route through the Tian Shan Mountains.

Today, the ruins of the caravanserai offer winding dark corridors illuminated by open rooftops, and you’ll also find a mosque, dungeons and a well. It’s rarely visited so it’s for the traveler wanting to touch history in solitude away from the crowds.

And with the terrible roads to get here, you can enjoy the fun adrenaline rush of the challenging drive to this abandoned caravanserai located at a height of 3,500 meters.

This lake is a natural curiosity in Kazakhstan, famed for its dead and bleached spruce trees that stick out of the water. The lake is a product of an earthquake in 1911, which created a natural dam after a big landslide, which filled up with rainwater over time.

The trees here are merged in turquoise water, and have surprisingly not decomposed over time, so on first appearance, it looks like there is an underwater forest here.

The Gates of Hell, Turkmenistan

Set in the vast Karakum desert in Turkmenistan, there is a hole that keeps burning. The flaming crater has obtained the appropriate name “The Gates of Hell” and can be seen for miles. The crater collapsed in 1971 thanks to a Soviet drilling rig, and punctured a pocket of gas that set the hole alight. The crater has been burning ever since.