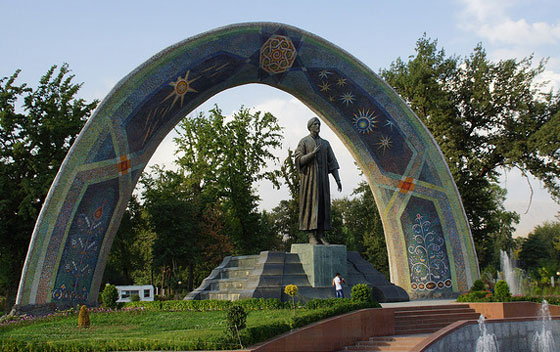 Hidden in the Fan mountains in the northwest of Tajikistan is the resting place Rudaki, the father of Persian poetry. Born around 860, he is one of the foremost historical figures of post-Soviet Tajikistan, strongly shaping the national identity as an icon of not just artistic achievement but also as a cultural touchstone for modern Tajiks.

What kind of life did he lead?

Rudaki is a somewhat more glamorous historical figure, who was semi-royalty, served as a court poet, singer and musician in Bukhara to the ruler Nasr II, until he fell out of favor in 937 and was dismissed back to his hometown of Panjrud, where he died four years later.

But he lived on in the memory of the Tajik people.

Indeed. He has even been portrayed as a kind of literary action hero/heartthrob in the 1959 dramatized biopic, A Poet’s Fate (directed by Satim Ulughzoda).

Also, about five hours’ drive away from Dushanbe, the capital of Tajikistan, in Panjrud, Rudaki’s hometown and resting place, everything from the main street to a large public park near the parliament building, which also has a giant statue of the poet, is graced by his name.

Does the mausoleum have a lot of visitors?

Surprisingly, in spite of his prominence in Tajik culture, the mausoleum’s remote location seems to have imparted a stillness, an air of sanctity to it. The gravel road leading to Rudaki’s tomb is rocky and uneven, and though his mausoleum was built in 1958, the people of Panjrud still look up with surprise at the sight of foreigners and tourists.

The mausoleum is fenced off behind carved wooden gates which you have to request the keeper to unlock before you visit. Inside is a well-manicured, expansive, lush green garden filled with roses. Written over the gate, in both the Cyrillic script that Tajiki is written in now and the Persian-Arabic script that Rudaki wrote in in the 10th century, is one of the poet’s most famous verses, which says, “There is no greater joy in this world/ Than seeing the faces of friends.”

Inside, the marble walls and floors are a glowing, pristine, almost heavenly white, diffused in natural light that shines from holes in the ceiling on the marble-topped dark wooden coffin, placed in the center of the mausoleum. Downhill from this spot is a small museum which has artifacts from Rudaki’s life and the history of the region, along with a library of several translations and editions of the work of Rudaki and other Persian poets.

Was he quite prolific?

Academics have estimated that Rudaki produced more than 100,000 poems, although only a thousand have survived, many of them in fragments and found from varying sources. Nevertheless, Rudaki is credited with establishing Persian as a poetic language and setting down the blueprint for the style and form of generations of Persian poets for centuries.

How can I best get there?

You can take a mashrutka or drive yourself from Panjakent. The surdier the car the better, as the road is not in the best condition. But if you’re on the Central Asia Rally, you’ll have come well prepared.