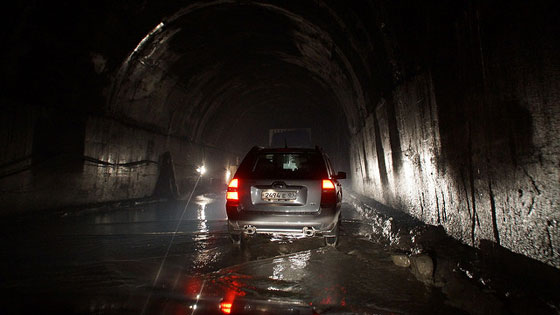 The purpose of any tunnel is to get you from one place to another, preferably still breathing. But this perilous, dark, damp one is making no promises in that regard.

Can’t wait to go already. How long is it?

Five kilometers. This stretch of hollowed-out asphalt, dubbed The Tunnel of Fear (and worse) by locals, connects the capital city of Dushanbe with Khujand to the north. Its main selling point is that unlike its predecessor, a simple dirt road that was regularly rendered impassable by all-year-round avalanches, avoids cutting through less-than-friendly Uzbek territory.

I see the point about avalanches, but Uzbeks?

Well, whichever motive was stronger, the fact remains that the construction of this tunnel has allowed commerce to flow with far less interruption; also,Tajikistan doesn’t have to be split in two through the entire winter season any longer.

Sounds fantastic, so what’s the problem?

Well, let’s start with illumination in the tunnel – there’s none. Apart from the headlights of your car and those of your fellow tunnel users, there is no lighting at all to speak of.

This wouldn’t be that much of an issue; an inconvenience, really – until you realize it’s almost like every pothole that’s ever existed has popped along for a chat – and then forgot to leave. We’re not talking small potholes that give you a little rattle as you drive along, but BIG ‘uns. Deep, axle-snapping ones that are difficult to see in the dark tunnel, that – surprise! – also happens to be filled with water. Some of the potholes have several feet of water, and are basically good candidates for a wildlife documentary on cave ponds.

Wait, there’s more. The tunnel does, in theory, possess two lanes in the form of two mostly separate tunnels through the mountain; however, one or the other is perpetually closed for repairs, making the tunnel a permanent one-way street.

What fun they must be having in there.

And even more: the reality of the tunnel’s width is ignored by practically every user, including SUVs, Chinese 18-wheelers, and sturdy Soviet Ladas at both ends of the tunnel simultaneously.
So anyone embarking on the journey through the Anzob tunnel signs up for a gut-wrenching obstacle course that includes oncoming traffic, broken-down construction equipment, and the above mentioned feet-deep ponds.

Things could be worse still, though: you could always break down. There are a number of reasons why breaking down in this tunnel would be less than ideal, especially as the odds are so long against getting to the other side in one piece.

Besides being trapped in a dark, damp tunnel where other cars are careering around you chaotically, the most terrifying reason you’d want to keep moving is the absence of ventilation.

Yup. With one, pathetic, token fan pushing air around in there somewhere, the tunnel is filled with exhaust fumes so thick that visibility is only a few feet. Carbon monoxide poisoning would be certain, and the amount of time you’d spend trapped would determine whether that exposure becomes fatal or not. But that’s it – if you can survive the potholes, the traffic, and the fumes, you’re home and dry, at least til next time!

Oh, except for the rocks. There’s always the occasional falling rock to keep an eye out for too. That’s it though. Apart from no lights, giant, water-filled potholes, every-man-for-himself navigation, toxic fumes and the sporadic surprise avalanche, the Anzob Tunnel is totally safe.

A few Central Asia Rally participants might be tempted to visit its southern end, pictured above, on the 6th or 7th day of their journey to witness actual people emerging from it, each one a testimony to the invincibility of our species on this planet. Join the participants if you will – if nothing else, next time you find yourself losing patience on the road, you could be thinking “Could be worse. Could be the Anzob tunnel.”