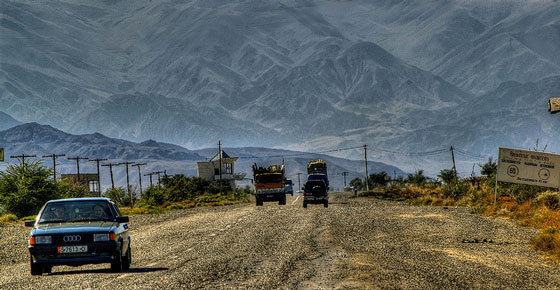 As you approach the destination of your Central Asia Rally on day 11, your path will take you past the very core of Central Asia – the Fergana Valley. We don’t just mean this in terms of geography: the valley, enclosed by the the Gissar-Alai range to the south and Tian Shan Mountains to the north, also encapsulates the ethnic and cultural diversity of the entire region in its patchwork of Tajik, Kyrgyz, and Uzbek enclaves and exclaves.

And not always in the most peaceful of ways.

Well, no. But if you know the rules, you can navigate around border clashes in this volatile region and witness the daily life of a valley with a 2,300-year history that covers 22,000 square kilometers (nearly 8,500 square miles). Most of the valley is actually composed of flat plains, in stark contrast to surrounding regions in Central Asia, where the terrain is made up of deserts, mountains, and treeless steppes.

How large are the enclaves in the Fergana Valley?

Most of them are just tiny villages with equally tiny populations – most are home to fewer than a thousand people -, but they have survived because the people who live here consider it important to maintain their cultural heritage, and pass on the traditions of their ancestors.

Yes, especially when you consider the forces they’ve had to reckon with beyond the occasional violent flare-up amongst themselves beginning with Greco-Bactrian invaders from the west over 2000 years ago. Not long after, as a stop along the Silk Road, this area was converted by Muslim invaders. Then the Russian Empire took the Fergana valley at the end of the 19th century, and added it to the Soviet Union. What all of their invaders had in common though was that they all treated the Fergana valley as a homogenous unit, when in fact it was anything but.

Then they all gained independence from the Soviet Union.

Indeed, in 1991, and with their latest common enemy gone, the residents have struggled with cultural conflict ever since. Hardly a surprise if you take a look at the map and the patchwork they form: the enclaves they include Barak, a small Kyrgyz village surrounded by Uzbekistan; the Tajik village of Vorukh and the minuscule piece of land of Kairagach, both in Kyrgyzstan; then Shohimardon and So’x and the two tiny territories of Khalmion and Qal’acha, all surrounded by Kyrgyzstan, then the Tajik village of Sarvan in Uzbekistan.

Not easy. Not easy at all.

No. Many of them don’t even subsist using the same methods. This area is incredibly diverse and fertile, thanks to the Syr Darya river and its tributaries. So cotton, rice, wheat, vegetable and fruit cultivation plays a large role in the local economy as well as stock breeding, mining, and leatherwork. Luckily for them, Deposits of coal, iron, rock-salt, sulfur, napththa, gypsum, and a few more have been found in the Fergana valley.

So how many people live here altogether?

Fergana Valley is the most densely populated spot of the whole of Central Asia; almost a quarter of the region’s population (14 million out of 63 million) live in less than 5 per cent of the region’s total land area.

How can I avoid stumbling into trouble?

If you’re looking to explore the Fergana Valley more deeply after your Central Asia Rally, here’s what you need to know. Driving from Osh and on to Tajikistan is not a problem at all. Locals are generally known as friendly towards visitors and will usually point you in the right direction, although not everyone is fully aware of exactly where the border is drawn.

There is a check point a hundred kms from Osh, where you will be guided to an unfinished but smooth dirt trail on your left. This is a steadily rises and then falls around the enclave area. It will take into a town at the end of the road. Make a left here and follow the signs to Batken.

Another 100 or so km later you will arrive in Batken, and 10 more km to the border crossing from there. Again, there is nothing to worry about at all. You won’t accidentally stumble into Uzbekistan if you keep to the main road. However. Two important notes. The road mentioned above is not on Google Maps, and there is a direct road from Batken to Isfara which is also not on Google Maps, but it is on Openstreet Maps. You’ll see a lot of border crossings that are only for locals on Google Maps. Do not follow these, but make sure that you ride all the way on the nicely paved road to and through Batken and then follow the road out of town to the border.