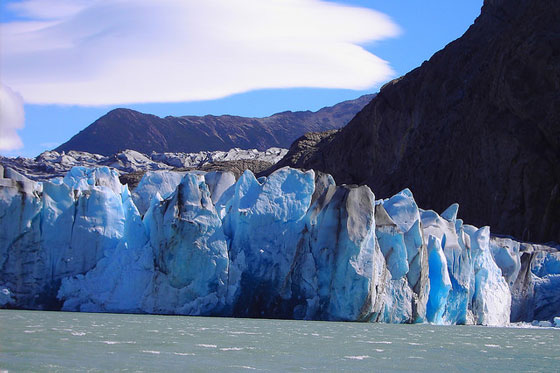 Continuing our “Put your inner Chuck Norris to the test” series, today we present you with a lake whose outstanding beauty is only matched by its remoteness and offbeat behavior. This piece of geological wonder high up in the Tien Shan mountains completely empties and then refills itself at least once a year, but no-one knows exactly when. Could YOU be the lucky enough to catch it in the act?

You have my interest.

Okay, but be warned. It is so far away from anything that a multi-day trek is necessary to reach it; “remote” doesn’t even begin to describe how far it is. The lake is found at the foot of the Inylchek Glacier in one of the most treacherous regions of the Tian Shan Mountains of Kyrgyzstan.

And this is the source of its waters?

It is. Every spring, when the frozen-over lake melts, the its waters lap at the tongue of the Inylchek Glacier, and successively break off great chunks of ice, which then drift out onto the lake. This in itself is a dazzling sight, but that is not all there is to Merzbacher Lake…

It belongs in a select subspecies known as a proglacial lake: a lake dammed by a glacier. Lakes in this group are found in various locations all over the world, but they usually enlarge until the glacier retreats, or else are short-lived in their existence.

Okay. But how is Merzbacher Lake different?

Merzbacher Lake is highly exceptional as the lake repeatedly gets emptied, only to get refilled soon after. The process can be described like this: the melt water fills up the lake in the summer period at a rate of up to two metres per day. When the lake is completely filled up, it bursts out and completely empties itself in just three days.

The release of the water occurs when the dam of ice is pushed upwards by the lake’s waters and opens up several glacial channels in the damming glacier. The water then discharges through these channels into the valley on the other side of the ice wall, where it flows into the Inylchek River.

That must indeed be spectacular.

When the lake has emptied itself, the ice dam lowers back into its former position, thereby blocking the glacial channels. Because of this, the lake begins to fill up again. This cycle of the emptying and refilling of the lake occurs at least once a year, in some years even twice. But it’s very difficult to estimate the timing of when the emptying is about to happen.

It usually takes place in August – this being the hottest month – but in some years, it has occurred as early as the middle of July. Because of the difficult estimate to get to the lake just at the right time, so far very few people have witnessed the phenomenon, and no-one we know of has documented it. So, if you’re feeling up to it, and would like the honor, this might just be your chance to take your inner warrior on that extra adventure after your Central Asia Rally.