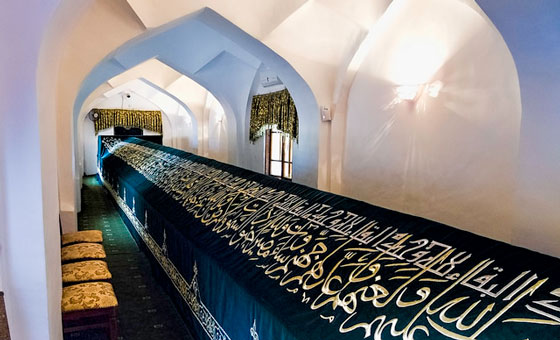 The 18 metre long sarcophagus of the mysteriously ceaselessly growing dead prophet in Samarkand is not the only one that claims to be the final resting place of Prophet Daniel, but it is arguably the most puzzling one.

Where are the others?

The most widely accepted one of these places is in Susa, Iran. But there are two other strong contenders even beyond Uzbekistan and Iran, who also lay claim to be the final resting place of Prophet Daniel. Because the Bible places Daniel in Babylon – modern day Iraq – at the time of his death, these are not too far-fetched either.

Okay. What does Samarkand have to back up its claim?

Samarkand does indeed seem to be the odd one among the contenders, that argue to be the real final resting place of the prophet.

According to legend, Timur (Tamerlane) tried to conquer modern day Syria, but failed again and again – apparently because the body of Prophet Daniel was preventing him. When he finally succeeded, according to lore, he ordered the body to be buried in Samarkand for good luck.

Well, quite. In any case, immediately after the body was buried, a natural spring sprouted nearby, which – naturally – is universally regarded to have healing powers. But local lore goes even further, and states that the body of Daniel was continuously expanding at a rate of around 5 cm a year. However, if this was true, the body of the prophet would by now have a length of over 125m, not “just“ 18m, as he died about 2500 years ago.

A much more plausible explanation behind the corpse’s growth would be that Timur was so afraid of grave robbers that he extended the tomb to make it harder for potential robbers to pillage the remains. Not a bad strategy by any means.

I think I’ll go with this one.

The absurdly long sarcophagus, as well as boasting beautiful drapes along its entire length, is adorned by five domes above. Though only Christians regard David as a prophet, he is equally revered by Muslims, Jews and Christians alike.  There is hardly any place in the world is a where Muslims, Christians and Jews come to pray, but this is one of them.

That is indeed remarkable.

Yup. This mausoleum, being away from other attractions of Samarkand, attracts a huge number of pilgrims of many religions and nationalities all year round. Join them on your Central Asia Rally – you need not belong to any religion to feel the calm and serenity of the place to your core.

Where in Samarkand is it?

You’ll find it on the outskirts of the settlement Afrasiab, which to in the north-east of Samarkand. You’ll notice the elongated five-domed edifice of the mausoleum atop a small hill, and the river Siab flowing at the foot of the hill. It’s a good place to pause for breath before you pick up pace again on day six of the rally.