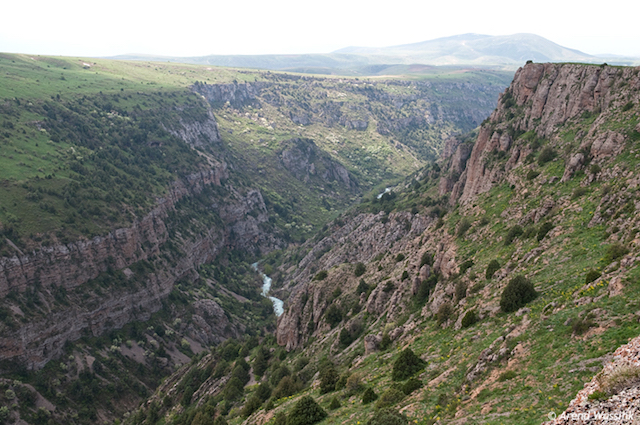 Spring is here, and as a centuries-old custom, the nature reserve of Aksu-Zhabagly dresses up in vibrant colours that mesmerize nature-lovers around the world. The biosphere reserve, however, is not only famous for its tulips….

The small town of Zhabagly is situated not far from Shymkent, Kazakhstan’s southern capital. It is the entrance to a gigantic nature reserve that reaches the borders of Uzbekistan. There are two national parks surrounding the Aksu-Zhabagly bioreserve, (one of the largest in Kazakhstan): the Sayram-Ugam and the Chatkal Biosphere reserve (on the Uzbek side.) The Aksu-Zhabagly is one of the only UNESCO biosphere reserves in the area. Fun Fact: It is located very near to one of the Silk Road routes.

This wonderful piece of heaven collects various types of flora (a recorded 1,279 species)  and fauna (238 species of birds and 42 species of mammals) on its steppes, mountains, glaciers, juniper forests and vivid green meadows. Fans of mountaineering will be impressed by Peak Sayram, which is more than 4,000 meters high above sea level.

When springtime comes and especially during May, wanderers in the area will see the green meadows transform into a painting of sorts, with dots of millions of red flowers, the tulips of Aksu-Zhabagly, blossoming in the sunshine. Often called Greig’s Tulips, this flower is the symbol of the reserve. Sometimes, horses are let out to roam freely during the summer here, further adding to the fairytale-like scene of the meadow.

Apart from an astonishing view, with some luck, trekkers can see animals like marmots, wolves, bears and lynx. Sometimes, high up in the mountains, tourists might even catch a glimpse of snow leopards.

Hikers adore this region due to its diversity in terrain and a landscape that never grows old. The big Aksu canyon just 25 kilometres away from Zhabagly, providing spectators with a 500 metre view downwards form its ridges. It is also where the Aksu River runs, filled with glacier water.

Some of Kazakhstan’s most beautiful lakes are located here, too: the Kyzyl-Kol and the Balyktin with their underground springs, the Akbiik Karst cave (with an underground lake) and the Kelte-Mashat Gorge. But, the surroundings of Aksu-Zhabagly provides an interesting spot for historians, too: the Karabastauc and Aulie paleontology sites are situated on the Karatau ridge, just 120 kilometres away from the reserve. The petroglyphs here were carved into dark stones, demonstrating images of animals, hunting, and the everyday lives of the locals.

If you do decide to visit this magical natural wonder, make sure that you’re current on the rules and regulations of the biosphere reserve. Also plan ahead: know the routes you are going to take and bring all the necessary equipment with you. The easiest way to explore the reserve is via organized excursions, were locals will lead the way and show you everything you should see. You can also do quite a bit of exploring on horseback, to which the same rule applies: plan ahead, organize the route (if you’re not going on an excursion,) and all will be just fine!