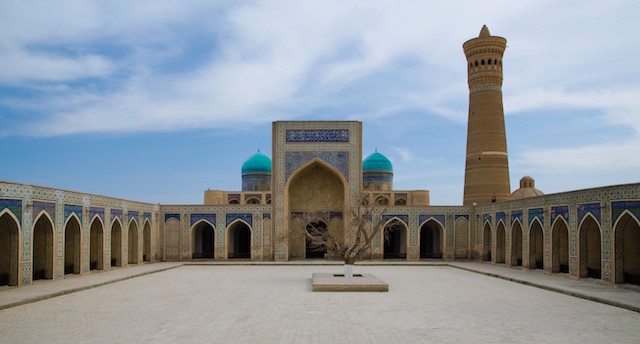 CA country that has played an important role through time, there are a lot of landmarks telling ancient stories scattered throughout the vast land. The wonders of Uzbekistan have a lot to offer for history fans all over the globe; architectural miracles and astonishing sites will sweep you off your feet and make you feel like Alice in Wonderland.

Protected by a 10-meter brick wall, Itchan Kala, the inside town of the Khiva oasis was a significant place for caravans back in the day; before embarking on the journey into Iran, they would stop and rest here. The inner town has been named a UNESCO World Heritage Site, and judging by the breath-taking beauty of the buildings, it’s no wonder. The monuments here are perfect examples of Muslim architecture; these buildings should definitely be on your bucket list. Among them is the Kuhna Ark, the Medressa, the turquoise-roofed Kalta Minor Minaret, the Juma Mosque and the Islam Khodja Minaret.

Also a UNESCO World Heritage Site; if you want to lay your eyes on something vibrant and amazing, Ak-Saray Palace is the way to go. The name means “white palace” in Uzbek, and it really is an astoundingly grandiose building. The construction started under Amir Timur and finished 24 years later, just a couple of months before the conqueror died. There are numerous courtyards around the palace and also a large number of buildings. However, even though the size of the palace is really impressing, you’ll completely fall in love with the colourful tiles and golden sapphire decorations.

The city of Bukhara is a place where you’ll want to stay forever, merely to be surrounded by beauty all the time, till the end of your life. Not surprisingly, the historic center of Bukhara is also a UNESCO World Heritage Site; situated right on the Silk Road and more than 2,000 years old, this city’s allure deserves to be preserved. If you’re curious about how a medieval town in Central Asia might have looked like, Bukhara will take you on a journey back in time so you can see. There are many 17th century madrasas that you should check out, and the tomb of Ismail Samani is a must-see.

Situated at the center of the ancient city of Samarkand, Registan Square is famous for its three madrasas, boasting of different exquisite architectural elements and entrances facing each other. It is said that these three buildings, the Ulughbek Madrasa, the Sher-Dor Madrasa and the Tilla-Kori Madrassa are the reasons why Samarkand was listed as a UNESCO World Heritage Site in 2001.

One of the most amazing wonders of Uzbekistan, this was the sacred burial site of royals and nobles. The Persian meaning of the word is “the living king,” and the site was a very important place of pilgrimage during the Middle Ages. The legend surrounding the name of Shah-i-Zinda is that Kusam ibn Abbas, one of prophet Muhhammad’s cousins, was beheaded for preaching Islam. However, he took his head and escaped underground and continued to live. Tombs and mausoleums around the necropolis look nothing somber, however; they are azure coloured and beautifully embellished.

The mausoleum of Amir Timur and his descendants, this building looks like a scene from Disney’s Aladdin. Built at the beginning of the 15th century, the buildings attest to the careful craftsmanship of medieval builders; the proportions are accurate, the light and dark blue glazed bricks are arranged elegantly, the rosettes mimic the starry night sky. The inside is equally magical, with onyx and marble almost everywhere and paintings inlaid with semiprecious stones.

It may be a small town, but it has more historical significance than many metropolises. The age of Karshi is more than 2,700 years, and since it was located on the Silk Road that lead through Central Asia and India to Afghanistan, it was a preferred spot for invaders. Even Alexander the Great tried to conquer this town and was amazed by the heart of locals and their love for independence. The name “Karshi” only came after 1364, when Tamerlane ordered the construction of the fortified palace (the name also means “fortification” in Turkic language.) There are many mosques and bath-houses that are worth seeing in the city, and the brick bridge built over Kashkadaya River will blow you away for sure.