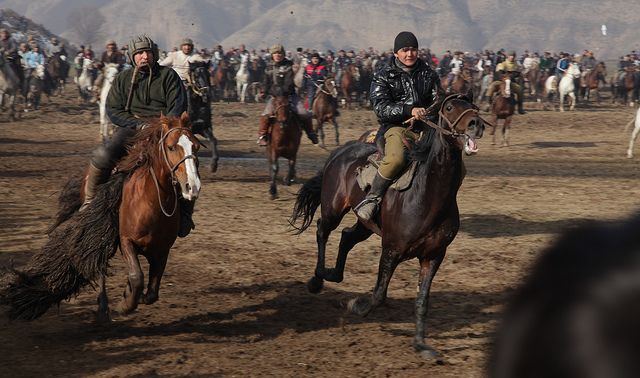 What are your thoughts when you think about buzkashi? Well, you probably don’t, because it’s a game that’s hardly known outside of Central Asia. It’s a shame though, this game could hardly be any more exotic in a powerfully bizarre way. Fierce riders fighting over a goat’s 30-50 kilo carcass, using strategic planning, fighting virtually in hand-to-hand combat and displaying the best horsemanship we can find on the face of the Earth. The Central Asian Rally takes you this enchanting place, where you may discover the most bizarre of their traditions.

Originating from Northern Afghanistan, sources tend to agree that the game must have evolved from locals trying to protect their animals from pillaging Mongols, who grabbed the goats while riding. It’s not difficult to picture how buzkashi came to existance: A proud goatherd bringing back an animal, boasting how he got it back from a Mongol. „No way!” said his friend, „show me how, or it didn’t happen!” So our man did. Their friend, who was watching thought it looked like fun, and asked him: „Now let ME try it!”

For our 21st century minds the game may look barbaric and a remnant of darker times. But what makes a sport popular? Competitiveness, passion, and elevating the best of us who excel in it. Mind you, life and society in 21st century Central Asia is not that much different from old times as it is evident for us.Olympic buzkashi might be a long way away, with standard rubber goats and Nike harnesses, but the way the game is regaining and surpassing its former popularity it might not be impossible at all.

Yes, contrary to what one might believe, buzkashi is more popular than ever. With the assistance of modern media, and historically difficult Central Asian logistics sorted out, it’s more than just the villagers’ traditional festive pasttime it used to be. Matches can be organized on a whole new level, there’s more money in the sport than there had ever been, and expert riders – the chapandāzān – get more fame, recognition and wealth than their grandfathers could have dreamed about.

Unfortunately the hundreds of billions of dollars the US put in the Afghan recovery process did not reach the desired effect. As can be expected in such a rigid hierarchical society, it made a few people incredibly rich, while making little difference for the masses. It did make one impact though: Powerful people of Afghan society invest in buzkashi heavily. The rich and the powerful don’t spend money on buzkashi to make a profit, though it can be very lucrative. The elevated social position and being a buzkashi patron are interconnected. Buzkashi success brings social respect, and someone of high social status is expected to maintain stables and teams. This sponsorship and elite-bred horses elevate the game in previously unknown heights.

Buzkashi horses are specially bred for the game of course. All stallions, as they are the most powerful and competitive. They not only have to be quick and agile, but also have to be used to tumoltuous crowds of other crazed horses. They are trained since colts not to trample on fallen riders, as it often happens. And perhaps most importantly of all, and mostly against their nature, they cannot be freaked out by a bleeding carcass squeezed to their side.

The Lower Half of the Team

Horses have always been an essential part of Central Asian culture. Badakshan, the cradle of buzkashi, had their own special breed they used for the sport. Tragically history that marred the region didn’t spare these animals either. Soviet occupiers during the 1979 war knew exactly how much horses meant for the proud people here, and killed each one they could find. Later, when the Taliban took over, they confiscated the remaining animals for their use, but the ignorant handlers drove them dead while using the exquisite animals for mules’ work.

The special, traditional breed got all but extinct. However, as Western money flowed in Afghanistan (into at least the potentates’ pocket), they started importing the best horses Central Asia could offer. It is not only Afghanistan where they play buzkashi, the game is very popular all over the Central Asian region, albeit in different names: Kokpar in Kazakhstan, kokburu in Kyrgyzstan, Tajikistan. The game is played with slight differences in the rules, but is essentially the same.

The horse breeds from these, flatter, lower-lying regions are somewhat larger than the original Badakshan mountain horses. The result made its mark on the game, too: The larger, more powerful horses have an advantage in the melee. They, however are less agile, so buzkashi is taking a turn to the physical – not that the enthusiastic crowds mind very much. From a taller horse a taller rider with longer arms is at advantage, too, so the build of the champions changed a little as well.

The size of the field varies from country to country, the most important rule is that players are not allowed to harm each other and each other’s horses (anymore…). There are 10 riders in each team, but only half of them are on the field in a half.  There are international buzkashi competitions already, and the way it is going it is very possible that we can see buzkashi even if not in the Olympics, but in well televised Champions’ League-stale events.

But really, lose the goat. Get something rubber.