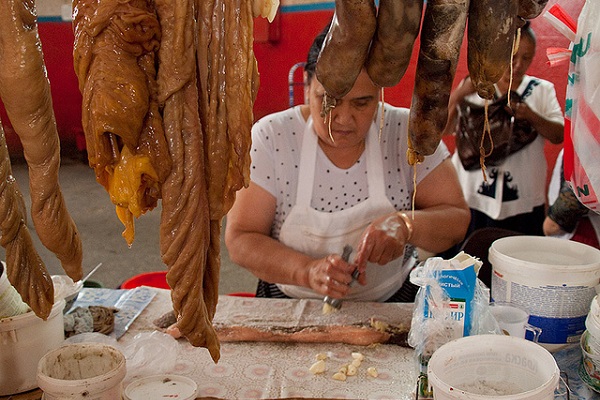 Remember our advice to explore on the Central Asia Rally with an open mind? Well, you’d better. It is the land of overflowing hospitality indeed. But the importance of showing respect to the Central Asian hosts has never been better illustrated, than now. Have you heard about how chuchuk, a type of Kyrgyz horse wurst got a Scotsman in trouble?

Michael McFeat, a Briton working in Kyrgyzstan can be relieved only to be deported from the country. At first he was arrested, then charged with racial hate speech, facing 3 to 5 years in prison. And for what? Chuchuk. Chuchuk is a traditional type of Kyrgyz horse sausage. McFeat compared it to some other, unprocessed body part of the animal, and that’s when things started to get out of hand..

The worst mistake McFeat made was drunk posting, probably, but the tasteless joke about chuchuk is wrong on many levels. Chuchuk is everything but tasteless. Some of us (the daring ones) at the Central Asia Rally have tried it, and is quite spicy. Definitely an acquired taste for Westerners, though.. Not too sophisticated for a culinary explorer either. And yes, it is made of horse, which appalls some of us. But it is a deeply cultural thing, and more sophisticated than you’d first think.

Horses are specially bred for consumption, it’s not just any kicker that breaks a leg. Mountain grazed young mares are considered to be the tastiest. Moreover, traditionally chuchuk is a delicacy, reserved for the most honored guests of the table. Making fun of that is couth – and stupid. Besides, McFeat is from the land of haggis. Frankly, I find haggis deeply disgusting, both in content and appearance. But I did keep an open mind, and found it really delicious!

You be the judge. However, we warn you there’s only one legally accepted answer to that. And seriously, why would you want to say something like that publicly? He can’t have read our warning about how the Central Asian hospitality requires complete respect from the guest’s side. The Scottish foreman posted an unambiguous remark on Facebook about Kyrgyz people going crazy about horse’s penises. His local employees were livid about the chuchuk joke and called a strike, refusing to work for him.

He lost his job, which was a goldmine for him – literally. He was welding superintendant for the Kumtor Gold Company. Kumtor accounts for one third of Kyrgyzstan’s exports, and over 10% of the total Kyrgiz economic output. After the chuchuk post went viral in Kyrgyzstan, causing a nationwide uproar, Kumtor’s leaders advised him it might be best if he left the country.. When he tried to do just that, though, he was arrested at Bishkek’s Manas airport.

Michael McFeat is off the hook for hate speech charges, since authorities found he wasn’t enticing ethnic violence through his comments. However they found – surprise-surprise – that his residency and work permits are not in order, and he is being deported from Kyrgyzstan. The British foriegn office did contact the Kyrgyz authorities to smoothen the case. Really, they were never going to actually put him in jail for that. Kyrgyzstan is not Saudi Arabia.

But here’s the lesson for you: Be respectful, and don’t be a jerk. Treat Central Asia with respect, and the adventure will be the time of your life.