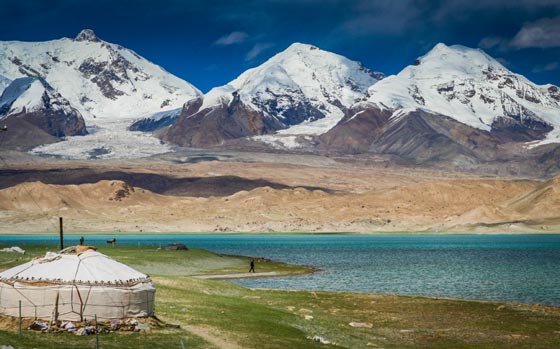 There’s no denying it – yurts, the circular tent-like houses native to the endless rolling steppes of Central Asia, are the epitome of a happy marriage between utility and beautiful design, so it’s not surprising that they’ve not only endured through millennia up to the 21st century, but populate the globe from Siberia to Canada to South America to Australia, in guises as manifold as the limits of modern technology allow. So how have they conquered the world and our hearts? Look no further to find out everything about the evolution of the yurt.

Yurts, or gers, as the locals call them, go back at least 3000 years in Central Asia. The first written description of a yurt used as a dwelling was recorded by Herodotus, who lived in Greece between 484 and 424 BC, and is regarded as the father of history. He described yurt-like tents as the dwelling place of the Scythians, a horse riding-nomadic nation who lived in the northern Black Sea and Central Asian region from around 600 BC to AD 300. Thus, the yurt was described in the first historical document in the world. Archeological findings have proven that that the first empire of steppe warriors in Central Asia, the Huns, who were active from the 4th to the 6th century AD, did indeed dwell in yurts.

Yurts in the middle ages

Our next written records of yurts come from Genghis Khan himself, who in the 12th century established the Mongol Empire, which became the largest continuous empire in history after his death. He laid out elaborate rules concerning the rituals that took place in and around these living spaces, whose next detailed description reaches us via Marco Polo, the first Westerner who set foot in the Mongol Empire, in the 14th century. He wrote: “…They [the Mongols] have circular houses made of wood and covered with felt, which they carry about with them on four-wheeled wagons wherever they go. For the framework of rods is so neatly and skillfully constructed that it is light to carry. And every time they unfold their house and set it up, the door is always facing south.”

A piece of living history for you to witness and experience

Your Central Asian adventures will show you that this tradition is still very much alive and well, as is the ancient nomadic lifestyle of the region that has these people pack up their yurts – which easily withstand even the harshest winters, despite their lightweight, portable structure – and move every few months, together with their herds (which often include the long-haired goats that provide much coveted cashmere wool!). If you are lucky enough to get invited into a yurt, you’ll enter a world quite unlike anything you’ve ever seen. Curious already? Here’s a little taster to whet your appetite.

In and around a yurt in Central Asia

The first thing that will strike you is the ingenious wooden frame of the yurt. It consists of one or more expanding lattice wall-sections, a door-frame, bent roof poles and a crown. Because the crown is located at the top, fresh air regularly circulates through the yurt as cold air flows down and hot air flows upward.  Larger yurts also have one or more columns to support the crown and straight roof poles. The struts of the roof fan out from the crown that accommodates a stove pipe and can be opened up to the elements on a warm day or covered in the event of rain or cold temperatures. You’ll see that the lower sides of the outer wrapping of the yurt can also be raised to allow air to circulate freely to cool the interior on warm days. By the way, if you suspect that the decorating patterns on the felt covering all carry sacred meanings, you’re bang on: these are in fact as deeply ingrained in Central Asian culture as the patterns in their yak hair background…And as the experience of seeing it all close up is sure to be in a nook in your heart!

…And around the world!

At this point, I’ll even wager that your adventure trip to Central Asia, like that of many, many others, might actually be the beginning of a lifelong love affair with the timeless elegance of the design of yurts, and you too could join our global tribe of yurt-dwelling semi-nomads. Although yak and camel hair have given way to canvas or tarpaulin, or even Plexiglas and wire rope, and wooden poles to metal framing in the yurt’s present day incarnations, all yurt continue to retain their ancestors’ classic unbeatable form. Feast your eyes on these beauties that have popped up all over the globe. Inspired? Come and take the leap. It all begins with your Central Asia Rally adventure.