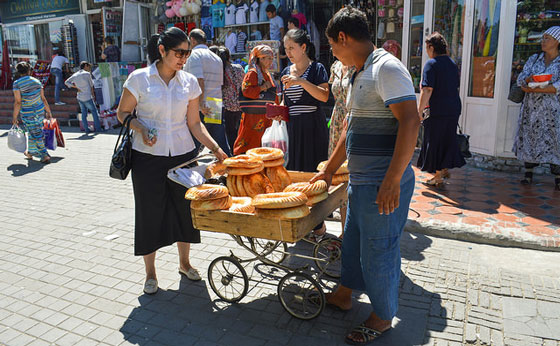 All great adventures, like the Central Asia Rally, deserve to be documented with equally magnificent photos; some of these will aim to capture city streets in all of their syncopated, iridescent glory – here are the seven golden rules of how to take great shots of urban settings.

Understand where you are

Street photography, in essence, features the human condition within a setting. Without a good understanding of this, you’re just taking pictures of people doing things. But if you have even a basic sense of tradition, culture, fears, values, habits, etc. of the population you’re capturing, you have taken the first step towards meaningful street photography. For example, if you understand why a car park can double as a fruit market at the drop of a hat in Armenia, then you can frame the image in such a way that tells that story, instead of trying to insinuate your own meaning into a foreign scene.

Learning about a culture will let you embrace it much more deeply – if you’re traveling without taking the time to observe, respect and understand the societies which you’re visiting, you’ve got bigger problems than dull photos.

Street photography, to my mind, is much more about the context than it is about the capture, but when you combine the two, you can end up with some very powerful images.

Though most of your best shots are likely surprise moments of reaction or emotion, street photography is not simply about finding yourself in the right spot at the right time, snapping away and praying for luck. With a little of awareness, you can put yourself in the right spot, or anticipate the right moment. It all begins with identifying patterns. From obvious ones – business, traffic, sunlight – to the more nuanced – street vendors prepping food, parks getting busy – there are an insane amount of pointers to look for to help get the shot you want.

You might have this nailed down on your own turf, but do spend the time doing it in the place you’re traveling, even if it’s just a few notes in your journal on various things you’ve noticed. Without these observations, you’re simply waiting around to get lucky, and you don’t want to rely on luck alone to take great shots.

Have a sense of direction (creatively)

Street photography is, by its very nature, candid. However, that doesn’t mean you can’t have a theme in mind when you snap photos. You can make the sense of adventure or of awe at historical depth palpable in your shots of the Central Asia Rally. This approach not only provides better context within the shot, but it gives a sense of cohesion to each album you’ll end up with.

Unless you aim for shots like this, stay hidden. While it’s not a hard-and-fast rule, natural, candid behavior typically furnishes the real essence of street photography. This isn’t easy to do in a place where your appearance might call attention to you. I like to use a long zoom lens (over 100mm focal length) to keep my distance, and rely on natural/provided light rather than a flash.

If you’re in a place where you’re not the only visitor around, it’s easier to get away with taking pictures of almost anything, so use that to your advantage. If not, try feigning a shot in one direction, only to take the one you’re really after immediately afterward – look slightly off target from where you want to shoot as you prep your settings. The photographer who stares at subjects while fiddling with their camera seldom gets the natural shot they want.

This is not just to appear stealthier; it’ll actually unburden your mind while shooting. Only take one lens out of your arsenal – a fast, sharp telephoto zoom – when you shoot street photography. Having a reliable lens is absolutely crucial, and not having to make the switch to a different one suddenly saves invaluable time. Also, try not to worry about a tripod. If you’re getting blurry photos, drop your aperture to a lower number to allow you to raise your shutter speed – ultimately it’s more important to have sharp, focused photos than a longer depth of field.

Make use of unique light

Open flame, lanterns, neon signs, string lights, anything. A usual giveaway to traveling abroad is the crazy medley of light that you find when wandering through cities. There’s something beautiful about capturing subjects illuminated by these impromptu makeshift sources, something foreign and mysterious and dynamic.

If you combine this tip with the one above about noting patterns, you can time your location to capture photos using both the natural glow of the late afternoon, while still getting these dynamic light sources right as they turn on.

When in doubt, find the late night action

It might not always be clear where you should spend time shooting in a city. Busy walking streets, markets, river docks – they all can play host to the subjects you’re seeking, but the timing often isn’t there. If you want to shoot and you haven’t picked you place yet, head to the street photographer’s bread and butter spot – the bar/club district.
Not just because it can be fun to catch merry people in all of their glory, but this scene usually yields the best vendor/customer interaction. In these situations, it’s good to boost your ISO to allow your shutter speed to remain fast, which can bring out more detail in night photos without compromising sharpness. You’ll see all kinds of people, in all degrees of inebriation. Plus, if you get tired of holding a camera or weary of navigating the crowds, a cold beer is usually a few steps away.

Aaand…that’s about all you need to remember to take great shots of streets wherever you go on this beautiful planet – on the Central Asia Rally and beyond.