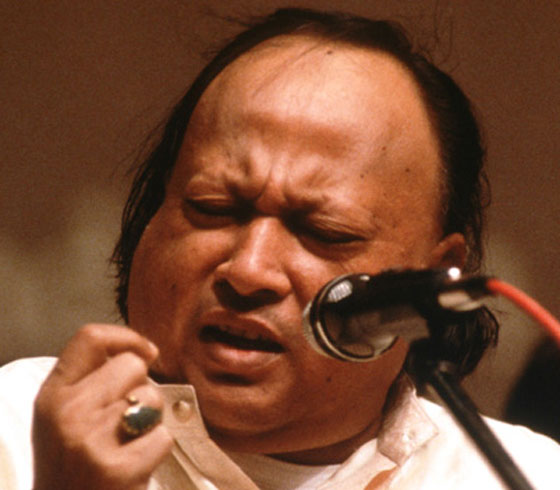 No page on all things Central Asian could ever be complete without a mention of Pakistani-born Nusrat Fateh Ali Khan, a singer of mainly Qawwali music and who, amongst those in the know, simply went by the nick “The voice from heaven” – which was just my impression when I first heard him sing the first few notes of a performance, many years ago now.

Yup. Unlike many popular singers with wildly animated styles, Nusrat Fateh Ali Khan performed seated, as firmly planted on the stage floor as a bean-bag. But although he may have been rooted to the spot physically, his voice launched into incredible, propulsive flights of abandon as he strained to embody the content of his songs, and his hands and arms often gesticulated and flew with the emotion of his singing, as you can see above.

Nope. While Ali Khan and his similarly seated band mates performed, they often found themselves amid a tumultuous sea of movement as adherents of the music became carried away and danced and spun like dervishes.

Indeed, the tradition of dervish dancing shares its Sufi Muslim roots with Nusrat Fateh Ali Khan’s Qawwali music, and both stem from the Sufi mystic’s goal of becoming so enraptured and carried away in a performance that one experiences a direct contact with his God.

He must have drawn an audience from all over the world.

Yes, and although he sang in the Urdu language in a millennium-old traditional style, his voice did indeed find an international audience following a collab with Peter Gabriel. Ali Khan and his Party were a sensation in the 1980s at England’s WOMAD Festival. See the video above.
He was subsequently signed to Gabriel’s Real World label. Not long after, he began teaching a course in Qawwali and Indian classical music in Seattle at the University of Washington, and giving concerts there too.

Language wasn’t a barrier, as, like the great gospel-raised American soul singers, Ali Khan employed unfettered, emotional vocals that illuminated his words more than a dictionary ever could.

Ali Khan always maintained that his music was not only for Muslims, but for the whole world, whatever religion (if any) you had. His message was one of peace. The message was about humanism, about how human beings should treat other human beings, how we should live together.

What are the historical roots of Qawwali music?

It (Qawwali means utterance in Urdu) was originally performed on stringed Indian instruments, but now uses harmoniums introduced to India in the 1600s. Ali Khan’s party employed two harmoniums, a lot of singers and a tabla drum, like those used in Ravi Shankar’s sitar-led music.

Did he write the words himself?

No, the lyrics of the songs were often taken from Sufi poetry, such as those by the Persian poet Rumi. Like Indian ragas, Qawwali songs very often follow a formalized mode and then depart into improvisations, during which Ali Khan took flight, repeating and turning words or phrases through all possible shades of expression.

He explained in many an interview that it was partially for those who didn’t understand the language that he went into the improvisations, because it made the words reach out. His idea was to put people into a trance, take them to the level they were going into, and pass on the message they had in the singing and the music.

Is he universally known in the Stans?

Not quite, but as the younger generation is gradually rediscovering its own heritage, more and more of them know and love Ali Khan. If/when you find yourself there, perhaps with us on the Central Asia Rally, bring him up in conversation. Whether they know of Nusrat Fateh Ali Khan already of hear of him first from you, everyone will win.