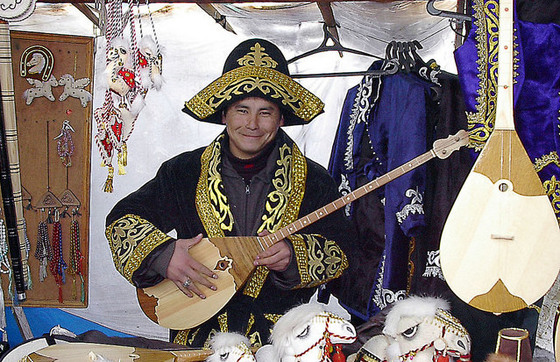 The Central Asian republics- Uzbekistan, Kazakhstan, Tajikistan, Kyrgyzstan, Azerbaijan and Turkmenistan – cover an area ten times the size of Britain, stretching from the Caspian Sea to the Chinese border. For many years, their music filtered out as an exotic and peripheral sound from the Soviet Union, but with their independence, the Stans have begun revealing distinct musical treasures.They all share a common cultural and historical background in the Islamic faith. The area is a meeting point between Iranian and Turkic people, culture and traditions, which informs the rich tapestry of the music of the Stans.

The most elevated musical tradition in Central Asia is the Shashmaqam– or the ‘Six Maqams’ of Tajik and Uzbek music. Historically the music of the upper classes, it earned disapproval from the Soviets and was forbidden for almost a decade, because it didn’t “meet the needs of the people ”.  To make them more politically acceptable, lyrics were duly rewritten by popular communist poets.

Something similar happened with the venerable Central Asian tradition of the improvising bards. The akyn and  bakshy minstrels were made to sing of heroic labour and socialist ideals, with a side serving of obligatory bombast.

The Soviet ideal for the music of the Stans was that of socialist Tchaikovskys, Beethovens, and Musorgskys composing concert works based on folk music, while the genuine traditions of one of the world’s great oral musical cultures were portrayed as archaic and feudal.

People from Azerbaijan are Turkic speaking but of Central Asian origin. They have been strongly influenced by Iran and also maintain historical connections with Persia. The most celebrated Azerbaijani musical tradition is the refined classical mugam. This is much freer and lighter and more emotional than the Shashmaqam of Central Asia. Mugam refers to both the modes in which the music is played and to the genre itself. Its most celebrated texts, speaking usually of divine love, come from Sufi poets. The King of mugam singers is Alim Qasimov who is celebrated for the power of his voice and his expressive vocal ornamentations.

Bukhara in the late sixteenth century finally became an Emirate capital, and a cosmopolitan city with flourishing trade routes fuelling its bazaars. It was from this court that the Shashmaqam, the most elevated musical form of Tajik and Uzbek and culture, derived. It began as a royal music of princesses and pavilions, with women musicians, sitting on floors, playing on instruments like the dutar (long-necked plucked lute), gidjak (spike fiddle) and doira (circular frame drum).

Shashmaqam ensembles of the classical period might contain a dutar , two tanburs, , a gidjak and doira plus two or three singers. Today’s ensembles are pretty much the same. The pre-eminent Uzbek performer of Shashmaqam is Munadjat Yulchieva. The foremost performer of instrumental muqam music is Turgun Alimatov – a master-performer on all the above instruments.

The main focus for Uzbek music (and all music of the Stans) is the toi – the rites of life. Uzbeks have a beshik-toi (forty days celebrated after the birth of a baby), a sunnat-toi (for initiation into Islam) and the marriage toi and so forth.  A toi is also an important musical academy. It’s where musicians gain their experience of practical musicianship. In contemporary popular music the biggest name is that of Yulduz Usmanova who is successfully modernising Uzbek traditional music and bringing it to a much wider audience.

Their musical links with neighbouring Uzbekistan are strong and they share their musical shashmaqam repertoire. Though the Tajiks use Persian-derived texts, their instrumental music is the same as in Uzbekistan. While the music of the plains and river valleys is closely related to that of the Uzbeks, in the mountainous south of Tajikistan there’s another more popular style known as falak, which means ‘celestial dome’, performed at weddings and other ceremonies.  Their leading performer is conservatoire trained Davlatmand Kholov. He is a great singer and a particularly good instrumentalist on the gudjat and the sutar. In the Pamir mountains of Badakshan there is also a rich variety of music including folk poetry.

There is a clear division between the settled and the nomadic people of Central Asia and this is reflected in the kind of music performed there. The city populations are primarily made up of Tajiks and Uzbeks and their music belongs to the urban classical and professional tradition.

However, Kazakhs, Turkmen and Kyrgyz, are nomadic and their music follows the rural or folk traditions which have a closer connection to a pre-Islamic shamanist and animist culture, which you can witness yourself on the Central Asia Rally.

Related to this is the art of the bard or bakshy – another branch of the widespread Turkic tradition. In these societies that are still close to their nomadic roots, the bakshy is also a shaman – acting as healer and magician. All three countries have traditions of sung epics performed by the bakshy.