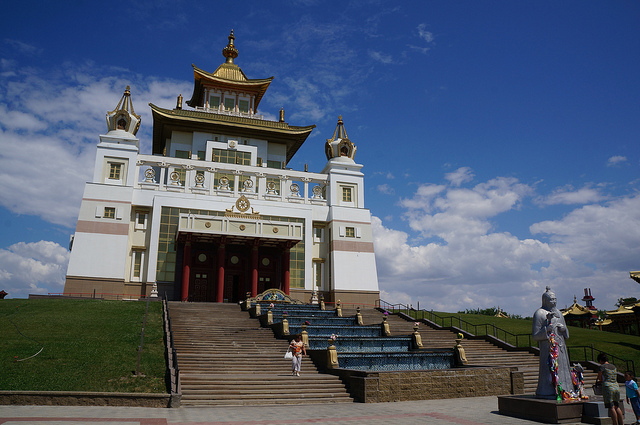 In the western side of the huge Russian lands, close to the frontier with Kazakhstan, lies the Republic of Kalmykia. This federal subject of Russia is known because of a peculiar characteristic: it is the only place in the whole of Europe in which Buddhism is practiced by the majority of the population.

The history of Kalmykia is a fascinating piece full of nomadic journeys, prosecution and mixtures of cultures from ancient tribes of Asia and Europe.
The ancestors of the Kalmyks, the Oirats, migrated from the region of Dzungaria, in the steppes of southern Siberia, to the Lower Volga region in the early 17th century. They expelled the Turkish speaking nomadic tribes that inhabited the land at the time, leaving those who decided to stay to be vassals of the new kingdom, which would be known as the Kalmyk Khanate. Short after, they stroke a deal with Russia which made them Russian subjects with the responsibility to protect the southern borders in exchange for receiving an annual allowance and access to the Russian market. 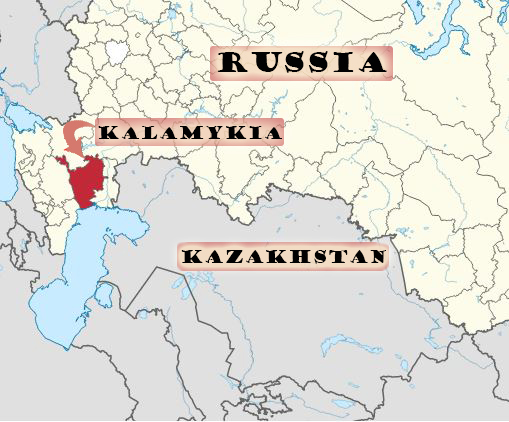 The Kalmyk Khanate reached its most brilliant period under the reign of Ayuka Khan, between 1669 and 1724. This king conducted several military expeditions to the neighbor countries, reaching the Caucasus area, achieving great political power, and, along with it, profitable economic arrangements with Muslims, Chinese and Tibetans.

However, what could have become a great empire would not stay autonomous for much longer. After the dead of Ayuka, the Russian expanding power became more and more a tyrant for the Kalmyks. The last Kalmyk king, Ubashi Khan, decided to return to their ancestral homeland in Dzungaria, in an epic journey crossing the Central Asian desert. Lots of soldiers died during the march, due to the attacks of their enemy tribes and a lack of drinkable water. The Russian empress Catherine the Great was unable to defeat Ayuka in his journey, but abolished the Kalmyk Khanate, leaving those who had decided to stay under the authority of Russia.

During the Russian Civil War, many Kalmys fought on the side of the White Army, till Lenin promised them lands and autonomy if they joined the Red Army. Despite the formation of the Kalmyk Autonomous Oblast the Kalmyks always remained loyal to their traditional leaders, nobility and clergy and never fully accepted the Soviet authorities. During the Second World War many chose to fight on the German side, which lead to heavy prosecuted during the communist years, including executions of the leaders, deportation to labor camps in Siberia and confiscation of properties. Also their religion was attacked by the time Stalin reached the power, which caused the destruction of the Buddhist monasteries and the deportation of hundreds of monks to Siberia.

The cultural repression and the forced exile of the majority of Kalmyks to Siberian lands caused a terrible impact on the preservation of their traditional culture. It was not until 1957 when Khrushchev allowed them to return to their lands, which they found occupied by Russians and Ukrainians. In 1958, Kalmykia was declared an autonomous republic within the Russian SFSR.
Currently Kalmykia occupies a total area of 76,100 km2 and has a population of 289,481 people. The official languages are both Kalmyk and Russian, and its capital is the beautiful city of Elista.

Due to its history of migration, the region of Kalmykia is nowadays a mosaic of different cultures, ethnics and religions. While there are still Kalmyk communities in many different countries, such as United States or Kyrgyzstan, those have adopted the religion and language of these countries. However, the word Kalmyc means “those who stayed”, referring to those who did not go back to Siberia or migrated to a new future, but stayed in their land no matter what. The most popular religion in the Republic is Buddhism, which makes it a rare curiosity inside of Europe, and apart of the official languages many Kalmyks are fluent in other languages like German, French or Croatian due to the migration past. There are different cultural tribes to be found inside of the Kalmyk nation, which include Turguts, Durbets, and Buzavs, as well as some villages of Hoshouts and Zungars.

Nowadays, Kalmykia has also been recognized as an important European chess center. This was supported by the fact that the former president of the Republic, Kirsan Ilyumzhinov is currently the president of the International Chess Federation.
Let yourself discover this region full of contrasts, beautiful places to visit and exotic culture that puts together the elements of nomadic tradition all through Asia and Europe. Perhaps after getting to know Kalmykia, you will as well become a Kalmyk – that is, one who stayed.