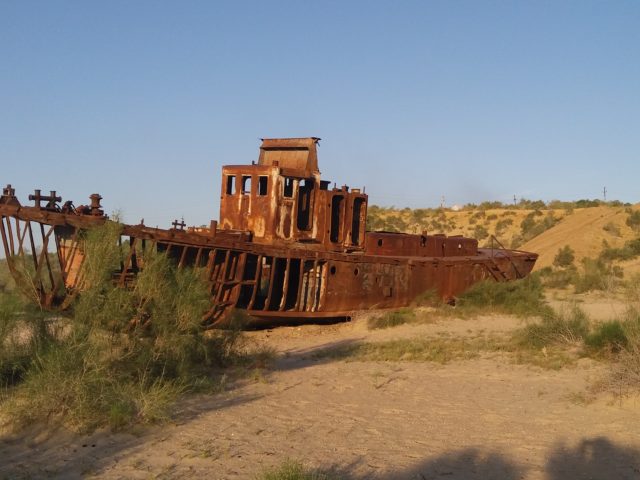 Living under the shadow of the Aral Sea disaster, this region in Uzbekistan spreading for miles across a salty desert has mostly earned its international reputation in travel for its disaster tourism. However, while Karakalpakstan may lack the plush beauty you’ll find in Samarkand’s turquoise colored domes or the fertile Fergana Valley, this region of Uzbekistan, shaped by the Kyzyl Kum desert and the Ustyurt plateau, holds its unique own beauty.

What and where is Karakalpakstan?

Despite the vast desert-scape, Karakalpakstan is unique when it comes to its soil. Unlike other deserts, the region formed the bottom of an ancient ocean once, so you’ll still find fossils showing sea creatures from the Cretaceous and Cenozoic periods.

Karakalpakstan is the lowest part of Uzbekistan’s Amu Darya basin, and is utterly surrounded by desert until you reach the shores of the Caspian Sea in the west.

The shores of the Aral Sea have turned into salt plains since the water has receded and you’re only going reach the remnants of the actual sea once you’re well into Kazakhstan. The eerie rusted hulks of the ships at Muynaq serve as a poignant reminder of one of the worst man-made ecological disasters in history.

Karakalpakstan is scattered with ancient monuments and sites. Once the homeland of Zoroastrianism and populous cities, there is plenty to see and do in the area.

The monuments belonging to Ancient Khorezm, one of the most ancient cultural regions of Central Asia, like the fortresses of Gyaur-Kala, Ayaz-Kala and Kyzyl-Kala, along with the settlement of Toprak-Kala, all date back as far as the 4th-2nd centuries BC. Ancient inscriptions found in Koi-Krylgan-Kala are some of the oldest in Uzbekistan.

Like the rest of Central Asia, the Karakalpaks have their own roots and traditions that stem from their pagan and nomadic traditions, but heavily influenced by Islam as well.

Meal times are the heart of the culture, and you’ll find dining etiquette here is followed strictly to a tee. Karakalpaks eat on the floor around a tablecloth and eat with their fingers, unless soup is served. If you dine with the locals you’ll always wash your hands before eating, and the eldest member of the party eats first.

The local food is similar to the rest of Central Asia, in that the local cuisine is a melting pot coming from the Turkmen, Uzbek and Kazakh kitchens. You’ll find the usual staples like plov, manty and shurpa, but there is a unique accent to the Karakalpak dishes.

Meat plays a huge role, like beef, lamb, camel and horse, but no pork, since the Karakalpaks are Muslims. Beans, corn and sorghum are included in the dishes, along with vegetables. One typical Karakalpak dish is a mix of roasted meat with boiled dough or dumplings like zhueri gurtik or may gurtik. Duram is also unique to the area, which is a mix of finely crumbled meat with dumplings, and seasoned with chopped onions and filled with broth.

With ancient monuments, a rich local culture and the natural beauty of the surrounding desert, Karakalpakstan deserves more attention on the travel map beyond the tragedy of the Aral Sea. To do something different, travel to the former shores of the Aral Sea and watch the sun rise.