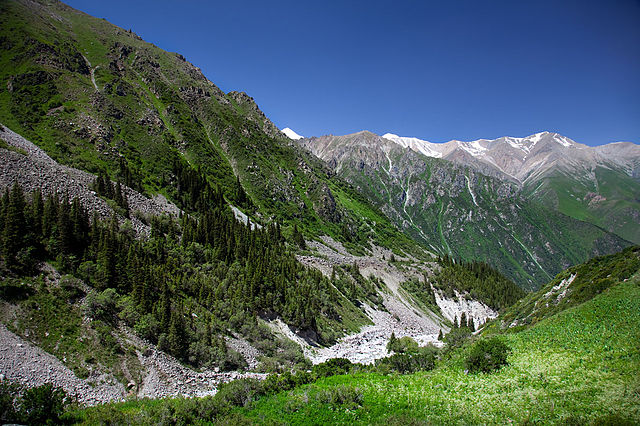 Kyrgyzstan is one of Central Asia’s most welcoming destinations, and being one of the only countries in the region that allows many tourists in visa free, it’s easy to see why most travelers looking to sample Central Asia make a bee-line to Kyrgyzstan.
While Kyrgyzstan seems to miss the glamour of neighboring Uzbekistan’s Silk Road cities or the rich opulence found in Kazakhstan, Kyrgyzstan has plenty on offer for the adventurous traveler.

Most countries are defined by their cities, but in Kyrgyzstan’s case, Bishkek is still a young city, lacking the historical pedigree you’ll find in most capitals, so in the case of Kyrgyzstan, you’re going to want to go off the beaten track to explore the best bits

In the Chuy Valley, this 25 meter high tower from the 11th century is the last standing piece of the city of Balasagyn. The tower functioned as a minaret once, and went as high as 44 meters before an earthquake damaged it in the early 1900s.

The remaining part of Balasagyn may lie in ruins, but the whole complex is now a museum, including the site itself, a small building with all the historical information and the artifacts found there.

Lake Issyk Kul is one of Kyrgyzstan’s natural treasures. This huge lake is the second largest alpine lake in the world and its high salt content means that the lake never freezes.

Tucked up in the Tian Shan mountain range, around 118 rivers and streams flow into this huge salinous basin of water, ranging from thermal springs to glacial streams. There is no obvious outlet for the water, although some believe there is an underground channel flowing into the Chu River.

Set in the rocky backdrop in the Alay Mountain range just outside Osh, Sulaiman-Too Sacred Mountain is Kyrgyzstan’s only UNESCO World Heritage Site. It was once an important pilgrimage site in Central Asia, and its location in the Fergana Valley meant it was also an important hub along the Silk Road.

The mountain houses a hive of places of worship, both ancient and newer. You’ll find ancient petroglyphs along the craggy mountain peaks, and sites dating back to the 16th century, like the two mosques. The mountain is symbolic of Kyrgyzstan’s ancient pagan heritage combined with the contemporary Muslim one.

Kyrgyzstan’s second lake after Issyk Kul, Song Kul maybe another one of the country’s top tourist spots, but up through the pastures and then into the mountains, Song Kul is rather inaccessible.

Once you arrive at Song Kul, there are no modern facilities so as not to damage the natural beauty of the lake, although you can rent yurts and get supplies from the local herders in the area.

Set in the backdrop of the peaks belonging to the Kyrgyz Alatau Range, Ala Archa offers some of Kyrgyzstan’s most beautiful scenery.

Just outside Bishkek, the Ala Archa Naitonal Park is great for those looking for nature near the capital. You’ll find snow-capped mountains, white water rivers, meadows, pines and rocky crags. You’ll find tracks for all level from a gentle stroll through the hard-core mountaineering.

This unusual region covering a vast walnut forest running spreading out around 11,000 hectares, makes the village Arslanbob a beautiful stopping point round Kyrgyzstan. The village is also the local market hub, and in the summer it attracts tourists because of its mild climate. The local population is ethnically Uzbek, which also adds to the unique feel of the village.

Arslanbob is a great location for those who love the great outdoors since there are plenty of hiking trails in the nearby hills and mountains.