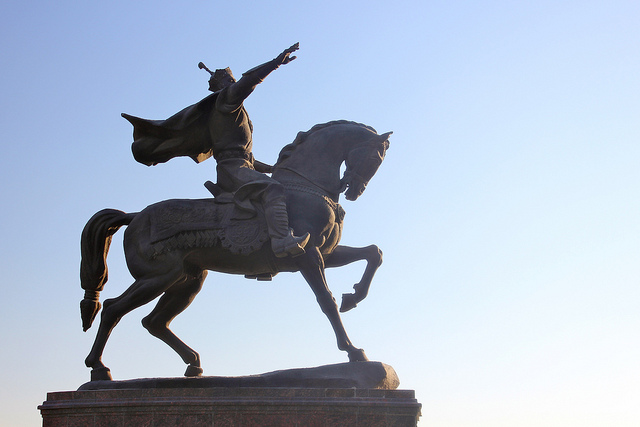 Timur was patron of arts, literature and architecture, he loved intellectual debates and made his capital Samarkand the most important center of arts and Islamic scholarship of his time. Even though he was illiterate, he spoke 3 languages, among them Turkic and Persian. He was a military genius, an extraordinary tactician, exceptionally smart – and the murderer of millions.

Like probably nobody before him, and hopefully nobody after him, he had the nasty habit of slaughtering not only his enemies without mercy, but also to extinguish the population of whole cities. The examples of his cruelty are diverse. After taking Baghdad, 20 000 inhabitants were beheaded on his command. When Isfahan revolted against him, between 100 000 and 200 000 had to die. The heads were usually used to build towers and walls, to send a very clear message to everyone else, who was thinking of resisting Timur.
In Sivas, Turkey, he showed some mercy. After his promise of creating no bloodshed, the city had surrendered. And keeping his promise, he only let 3 000 prisoners be buried alive.
However, the educated and artists were a little bit luckier. Usually they were spared and only brought to Samarkand to help building Timur’s intellectual capital.
Timur means “iron” in old Turkic, and iron he was in his mercilessness and determination. Like his byname Timur-e Lang (Timur the Lame) indicates, he was lame on the right leg after two injuries. An exhumation in 1941 also showed that he was missing two fingers of his right hand. Nevertheless, he had the strength to conquer the world.

He derived his entitlement to do so with two different approaches. He saw himself as successor of Genghis Khan, especially after marrying one of his direct descendants, and with that considered himself responsible for the restoration of the Mongol Empire.
On the other hand he promoted himself as “Sword of Islam”, as ruler installed by Allah. Because if he was not blessed by God, how else would it be possible for a mere mortal to be so successful with all his campaigns?
This “Sword of Islam” though, didn’t hesitate to slaughter millions of his brothers is in faith. It is said that Timur is responsible for up to 17 million deaths, which would be adequate with about 5% of the time’s world population. Although there is no way of verifying this number, even half of it would still be impressive enough.

Timur’s army was a mixture of ethnicities, religions and people, no matter if nomadic or settled, Christian or Muslim, no matter of Turks, Arabs or Indians, everybody was welcomed to join.
But how could the son of a minor clan leader rise to such power?

Born in 1339 near Kesh, nowadays Shahrisabz, Timur was a member of the Barlas tribe, whose people had descended from the Mongols and the original people of this area, his father being a minor noble of the tribe. During his youth, Timur witnessed quarrels between the nomadic and the ruling, sedentary clans. These quarrels grew to bigger conflicts, and finally Timur’s uncle, who was the chief of the tribe, had to flee. The ruling Mongol warlord appointed Timur to be the new leader, in the false believe that the young man would be easily controllable. He could not have been more wrong. This was Timur’s first taste of power and a deep desire for more was awoken.
Timur married the granddaughter of a former leader and plotted with her brother against the Mongolian overlord. The whole scheme did not go so well though, and they were forced to flee and hide.
Timur ended up as mercenary in Persia, where he soon stood out with his remarkable tactical skills and his charisma. After having gathered a big following, he and his brother in law returned home in 1364 and after several campaigns, allegiances with different sides and various betrayals, they gained control over Transoxiana. But with time Timur and his brother in law Hussein, once close allies, began to drift apart, resulting in open conflict and Hussein surrendering to Timur in 1370 . After Hussein being assassinated, Timur married his widow, a descendant of Genghis Khan, which put him in direct line with the great ruler. But since he still could not prove being a descendant of Genghis Khan on his father’s side, he didn’t call himself Khan, but Amir (which means general).

The Beast has been Awoken -And it is Hungry

But his hunger for territory was not satisfied with taking possession of his homeland. With time he conquered all of Central Asia. Then he turned his attention to Persia: He took Herat (nowadays Afghanistan) in 1383 and controlled the whole of Persia within 2 years. In 1395 he stood before Moscow and took it, by 1396 he had conquered Azerbaijan, Armenia, Persia, Iraq and Georgia, which he left completely destroyed to make it useless for the Golden Horde, descendants of Genghis Khan.
By then even the European rulers became a little nervous in their castles far away, but they sighed with relief when Timur decided to move to the opposite direction: In 1398 he captured Delhi in India with an army of 90 000 men. Then Timur looked west again and took Syria, where he destroyed Aleppo and Damascus, moving on to Baghdad. After that he moved against the blossoming Ottoman Empire, and once again Europe sighed with relief and thanked Timur for defeating the Ottoman threat on their doorsteps. On the other side they were also wondering what to do, if the scary beast should one day decide to march against Europe after all. So the various European rulers were striving hard to keep good diplomatic relationships with the Timurid Empire, sending chosen ambassadors to Samarkand.
Leaving them worrying for nothing, small Europe was not the challenge Timur had in mind next: In 1405, with almost 70 years, he started marching towards Ming China. But for his last campaign the odds and Allah were not on his side. Fighting an unusual hard and cold winter on their march, Timur fell ill and died on 18th February.
Timur’s Legacy – Cutting Both Ways

Defying Timur’s last dying wish, his descendants started year long fights about his succession. This, and the lack of any kind of governmental structures, which Timur had never put up after destroying the existing ones, lead to an imminent collapse of the Timurid Empire. Only Timur’s successor in India was a bit more lucky. He founded the Mighal Dynasty, which created the Taj Mahal and ruled till the British arrived.
The Islamic world has a torn relationship with Timur. On the one side he destroyed old capitals of Islamic intellectualism like Damascus and Baghdad, which never fully recovered from those strikes. On the other side, he made Samarkand a new intellectual center of Islam, scholarship, arts and poetry, which left him with a good image in Muslim Central Asia. In Uzbekistan he was idealized as folk hero in post Soviet times and also in Europe his image is rather positive, as savior from the Ottomans.
Timur was buried in Samarkand in the Gur Amir Mausoleum covered by the biggest block of black jade in the world at that time, with the inscription:
“This is the resting place of the illustrious and merciful monarch, the most great Sultan, the most mighty warrior, Lord Timur, Conqueror of the World.”