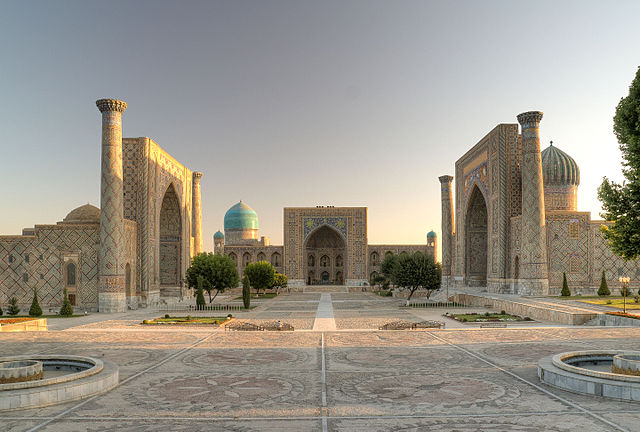 The turquoise domes found around Uzbekistan’s madrasahs, mosques and minarets have become synonymous with the Silk Road and Central Asian civilization.

While driving across the never ending Central Asian steppes and deserts, winding up mountain roads to the Pamir Highway and the rooftop of the world is only one side of Central Asia, as much as drinking kumis with the locals in a yurt is on the other, but one of the region’s main attractions is the glory of Uzbekistan’s Silk Road cities.

The Silk Road might have touched all of the Central Asian countries on one route or another, but Uzbekistan’s central position between China and Europe made it a hub of trading activity.

Despite being surrounded by desert and dry grasslands, Uzbekistan’s cities are a garden of life and some of the most underrated wonders of the world.

As the Uzbek capital, Tashkent has become a hub in Central Asia. It might not be the most beautiful city in the country, and lies in the shadow of cities like Samarkand and Bukhara, but what it lacks for in aesthetics it makes up with spirit.

Tashkent combines its Russian and Soviet past with echoes from the Silk Road, which manifests in the 15th century Sheikhantaur Mausoleum Complex located on the grounds of today’s Tashkent Islamic University. The Chorsu Bazaar also captures the vibrant feel of Uzbekistan’s trading history, as this farmers market spills out of the green domed building into the streets.

However, modern day Tashkent has a fantastic nightlife rivaling Beirut and Baku, which makes it such a fun destination to visit.

The name Samarkand conjures up images of the Silk Road, through riches and bazaars, it is a mythical city swept up in myth and legend.

Today, the city seduces its visitors with azure tiled domes and towering minarets. The evocative Registan, Guri Amir Bibi-Khanym Mosque and Shah-i-Zinda have been immortalized in poetry and prose, adding to the mystique of the city.

Uzbekistan’s second city lies in the central position on the Silk Road, and is now a UNESCO World Heritage Site thanks to its monuments and cultural history. Once the ancient capital of Tamerlane’s kingdom, Samarkand still retains aspects of its former glory.

Once an important trading city, Bukhara is still a cosmopolitan city catering to travellers. The city is clean and peaceful today thanks to the money it brings in from tourism.

Bukhara’s golden age saw an intellectual period of enlightenment, when famous scholars came to the city 1000 years ago. However, Bukhara has experienced a complex history, having been destroyed by both the Mongols and the Turks and also saw horrible cases of pestilence. The city was once rife with skin disease and parasites infected its waters.

Today’s Bukhara is now clean and safe, and still captures its former past of being a city of learning and trade, and is currently it’s a student town.

While Samarkand has its iconic buildings set about the Registan, Bukhara is a complete city that is perfectly designed, sporting some of the most beautiful examples of Islamic art.

To discover Bukhara’s true magic, it’s best to discover the city in the early morning light, when the tourists are mostly sleeping off the Uzbek wine consumed the night before.

Khiva lives in the shadow of Bukhara and Samarkand, but this 2,500-year-old city is an open-air museum in its own right. However, unlike Samarkand and Bukhara, which were cities of religion and learning, Khiva’s past is much cagier.

Its role on the Silk Road touched on the slave trade, since Khiva’s location between two deserts made it a lawless place housing bandits and slave traders.

Today, Khiva is quiet and has switched its slave caravans for tourist buses. The historic center is treated like a museum, since the live blood of the city takes place outside, but it’s worth visiting for the architecture. The Kalta Minor, an unfinished blue and green tiled minaret, has become an iconic symbol of the city.

The lush Fergana Valley has played a long-time role in the historic cross roads marking the ancient trade route. Kokand was founded back in the 10th century and has been a main stopping point for caravans on the way from China.

One of Kokand’s main sites is the Palace of Khudayar Khan, built in the 19th century, was one of Central Asia’s most opulent palaces and still draws in the crowds today.

Uzbekistan – the gem of silk road