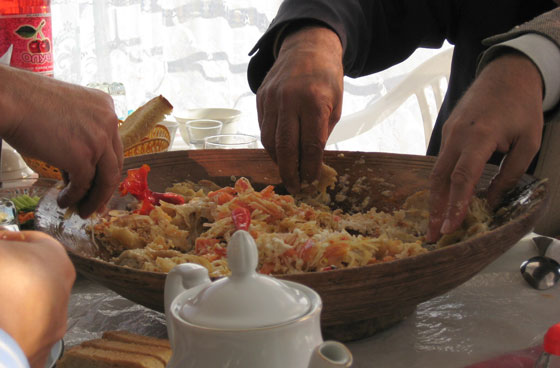 Tajikistan has two national dishes: plov (or osh), and qurutob. While plov is better known and is also the national dish of Uzbekistan, qurutob, a mix of onions and bread in a yogurt sauce (with a bit of optional extra meat and vegetables), is specifically Tajik.

Doesn’t sound at all hard to make.

It requires omelette-level kitchen craft. The only reason I can think of why it’s not more ubiquitous is that Tajik culinary literature in general is pretty scarce. I guess the Tajik people have been busy with far weightier matters to bother with this.

So what does it involve?

Well, you buy your fatir bread and qurut cheese at the market…Then sauté some onions, put it all together, maybe with some fresh scallions and tomatoes, or with some other vegetables, and you’re done.

Oh, right. What could be easier?

Yeah, it just happens to be harder to make for us because, well, the Tescos and Walmarts of the world haven’t started selling qurut and fatir for some inexplicable reason.

But fear not! It’s not all that hard to make the entire thing from scratch. It’s just somewhat more involved — and the result may even taste better than in Tajikistan. Fatir is a flatbread made of a rustic puff-pastry-like dough. Don’t be surprised if it turns out a bit dry and stodgy: that’s what it’s supposed to be like! It’ll taste much better when it soaks up the yogurt sauce.

The latter is prepared with the qurut. These are small balls of dried salted yogurt. By baking yogurt in the oven, you can make a version that’s pretty close to the original, even if your balls aren’t smooth and pretty enough to make a living selling them at a Tajik market. Finally, the roast lamb is optional: I’ve seen restaurants serving both vegetarian and carnivore versions. I’ll leave out the roast lamb bit here because you can look that up anytime.

How to make fatir?

For one flatbread, you’ll need:

Put the flour and salt in the bowl of an electric mixer fit with a paddle attachment. While you mix them at medium speed, add the water, then the egg, and keep mixing for one minute. Take the mix out and shape the dough into a ball. Cover it with plastic wrap, and let it rest for half an hour.

Okay. What comes next?

Qurut balls. I usually make four of these, they’re about 1 oz each.

Let me know how you liked it. If it goes down well, and you’d like a chance to savour more where this came from, you’re very welcome to join some of us on or next Central Asia Rally.