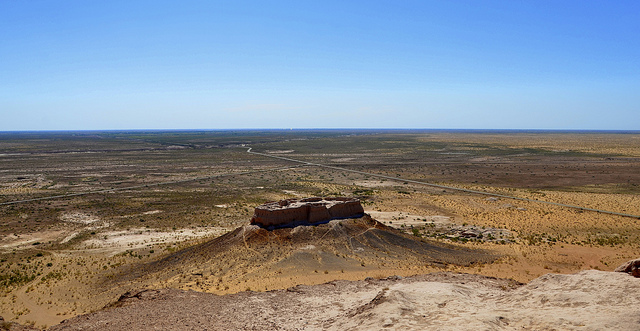 Amazing fairytale cities, rare species of animals, huge fresh oasis and large gold mines: despite all this richness and beauty, the Kyzylkum Desert in Central Asia has managed to stay away from the spotlight for a long time, which allows it to remain wild and pure. Few tourists venture here, but that might be a plus for adventure seekers who want to get off the beaten path.

The Kyzylkum Desert, also spelled as Qyzylqum, is spread over territories from Kazakhstan, Uzbekistan and Turkmenistan, in a region known traditionally as Transoxania or Sogdiana. Its name, “Kyzylkum”, means in Turkic “Red Sand”. Beautiful and vast, crossing the Red Sand Desert will be an experience you hardly forget.

It is the 16th largest desert in the world, covering a total land of 298,000 km2. In the north-west the desert is limited by the hollow of the Aral Sea, in the north-east by Syrdarya and in the south-west is bordered by Amudarya. Situated in between the Amu Darya and Syr Darya rivers, it is at an altitude up to 300 m, with different highs and downs that go across its sand dunes (maximum height of sand mountains is 75 meter) and its mountains.

It is hot in summer, middle temperature of June is 28 degree, in winter is from 0 to -9 degree. But it is not all dry and sandy. You will also find several oasis through its vast territory, and even a lake: the Aydar Lake. This, despite being artificial, is a beautiful resting place for the birds that migrate from the Aral Sea, and it is not uncomon to see them stay for longer periods and make their home around the lake. Also, several species of fish were introduced into the lake upon its creation, in order to make it work as a source of industrial fishing, which it is until today. The Aydar Lake is as well a tourist destination, with great opportunities to fish, yurt, or even ride a camel.

Perhaps you associate desert with free space and loneliness, and even though you might not find too many people, there is a very rich fauna that will keep you company. There are two different natural reserves in the desert providing optimal condition to the animals: Djeyran and Bukhara Natural Reserve.

Djeyran is an ecology centre located in the south of Bukhara, founded in 1977. It is the home of rare animals such as the Persian Gazelle, the Przewalski’s Horse, the Turkmenian Kulan, and the Houbara Bustard. Close to the settlement Dargan Ata, you will find the Bukhara Nature Reserve founded in 1971. Almost the double extension than the Djeyran, its fauna includes animals such as the Bukhara Deer, the Wild Boar, the Common Pheasant or the majestic Golden Eagle. Outside of the natural reserves, the desert fauna includes animals such as the Russian Tortoise, the Saiga Antelope, and the Desert Monitor, a huge lizard that can reach the length of 1,6 meters.

Important paleontologists have also worked in the area through history, finding in their way discoveries of dinosaur rests, early birds and other antique extinct species.

In ancient times, the Great Silk Road made its way through the Kyzylkum desert. The constant travels of the merchants made the cities inside of the desert prosper and let them became important points of the route both for commerce and accommodation. These cities, mainly Bukhara, Samarkand and Khiva are famous nowadays for their legacy and beauty. The people that the Silk Road would bring to the desert allowed it to have a very hectic life. Lots of people were living and working there, with many different professions such as sellers, interpreters, guarders of caravan or tax collectors.

The desert is tremendously rich in materials like uranium, silver, gas and oil, which gives it an obvious importance into the energy international market. However, the most important resource to be found in the Kyzylkum Desert is gold, as it is the place where the largest gold mine of the world is located. It belongs to the Uzbekistan region of the desert, and it is known by the name of Muruntau Gold Deposit.

The area had already been known as a rich one by the merchants of the Silk Roan in ancient times, as they knew that it was a good place to find large quantities of turquoise, a very appreciated mineral at the time to manufacture jewelry. However, it wasn’t until the 1950s that the Muruntau area was really explored, and the large amount of gold lying below the turquoise was found. It has been exploited since then, and nowadays it reaches a quantity of two million ounces per annum of total production.

The Kyzylkum Desert is not an easy place to get to, but if we have stirred up your curiosity, why not join the next Central Asia Rally and get to know this unique place during a once in a lifetime road trip?